In general, the W16 series engine consists of two piston groups from VR-shaped 8-cylinder engines, which are located at an angle of 72 degrees in relation to each other. Thus, a power unit with 4 rows of cylinders is obtained. 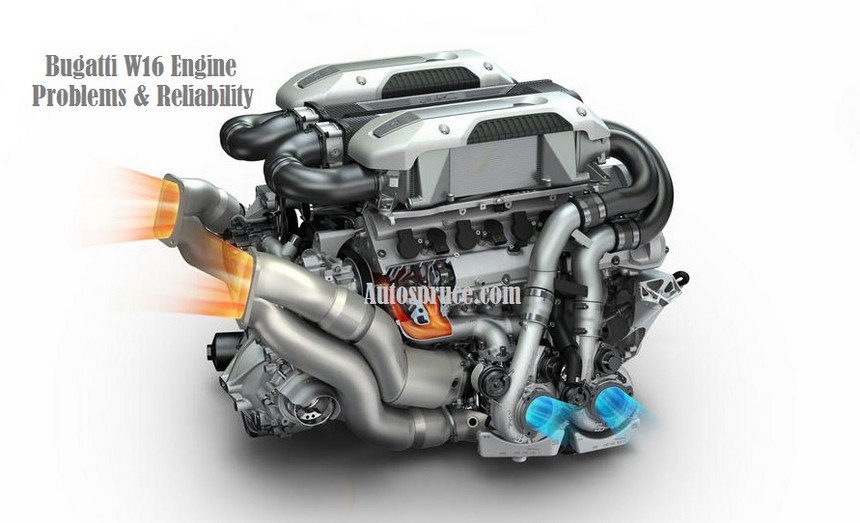 However, these engines are practically not found in the automotive industry. The exception is Bugatti Automobiles SAS, which manufactures and installs W16 engines. In its Bugatti Veyron vehicles. The engines are assembled in Germany. The number of parts in the motor is 3500 units.

The W16 engine was installed on production cars:

The power unit with an W16 engine capacity of about 8 liters is equipped with four 16-valve gas distribution mechanisms, each containing one camshaft and a turbocharger. Due to this design, the engine is capable of developing high power (up to 1040 hp), however, in order to avoid misunderstandings, the engine manufacturer declared the power of from 1001 hp.

The operation of the connecting rod-piston groups of such power units is negatively affected by the influence of inertial moments. The developers of the W16 engine solved this problem by:

The turbocharged 8-liter engine is not too “resourceful” full power is reached at 6500 rpm. In this case, the car accelerates to speed:

Optimum W16 engine performance at different speeds is ensured by a specially developed electronic control circuit for the gas distribution mechanism (timing), which continuously changes the valve timing. A separate massive radiator is used to cool the timing belt, which heats up strongly during fuel combustion (1.33 l / min).

Powerful W16 engine get very hot when driving at high speeds. Therefore, much attention has been paid to the development of their cooling systems. The W16 engine is equipped with a dual-circuit liquid cooling system, which includes:

In general, a large number of air intakes are structurally provided in the body, designed for effective cooling of the W16 engine. They largely determine the exotic exterior of the car.

Powertrains of the Bugatti Veyron, like all reciprocating internal combustion engines, require regular maintenance. The list of routine maintenance carried out in this case is no different from the standard list:

The only difference between the maintenance of this engine and the usual one is the exorbitant price. The engine must be serviced only by an official service, otherwise the warranty will be lost.

The simplest operation, which is changing the engine oil, will cost the owner $ 21,000. If we add here the replacement of filters and other consumables and components, carried out during the year, then the annual maintenance (excluding the cost of work) will cost the owner 132,000 US dollars.

If there are malfunctions in the operation of the W16 power unit, it is thoroughly diagnosed at an official car service.

After a careful visual inspection, specially trained mechanics connect the engine to special technological equipment, according to the indications of which the general condition of the engine is determined.

In addition to the input computer diagnostics, other methods are used. For example, an endoscope is used to assess the internal state of a honed cylinder surface. However, all types of input diagnostics are preliminary, since given the structural complexity of the motor, the final diagnostics of the engine is possible only after its dismantling.

Dismantling and repairing a W16 engine requires the use of special tools and high quality parts.

There are two ways to increase the power of the torque value of the Bugatti Veyron W16 engine:

Specialists of specialized tuning studios are able, by changing the settings of the electronic engine control unit (ECM), to provide an increase in engine power up to 1150 hp. from. In this case, the amount of torque will be 1350 Nm. The cost of such a chip tuning will be at least 250 thousand rubles.

It is possible to significantly increase the engine power if, instead of the standard units, you install:

After completing these works and correspondingly changing the ECM parameters: the engine power will increase to 1200 hp the torque will reach 1500 Nm.

Hypercar Bugatti Veyron with W16 engine is a unique car produced by the French car manufacturer Bugatti Automobiles SAS Founded in 1909, the company is now part of the famous German automobile concern Volkswagen AG and specializes in the production of luxury cars.

The Bugatti Veyron hypercar, which is considered the fastest production car in the world, was produced for 10 years (2005-2015). During this time, 450 cars were produced. Under the hood of this unique car, a 16-cylinder W16 engine is installed, with which the hypercar reaches speeds of up to 407 km / h.