The 1.5 TSI engine entered production in 2017, making its debut in the Volkswagen Golf 7. It is a new design that replaces the 1.4 TSI engine. The new 1.5 TSI engine is more powerful than its predecessor and consumes less fuel. 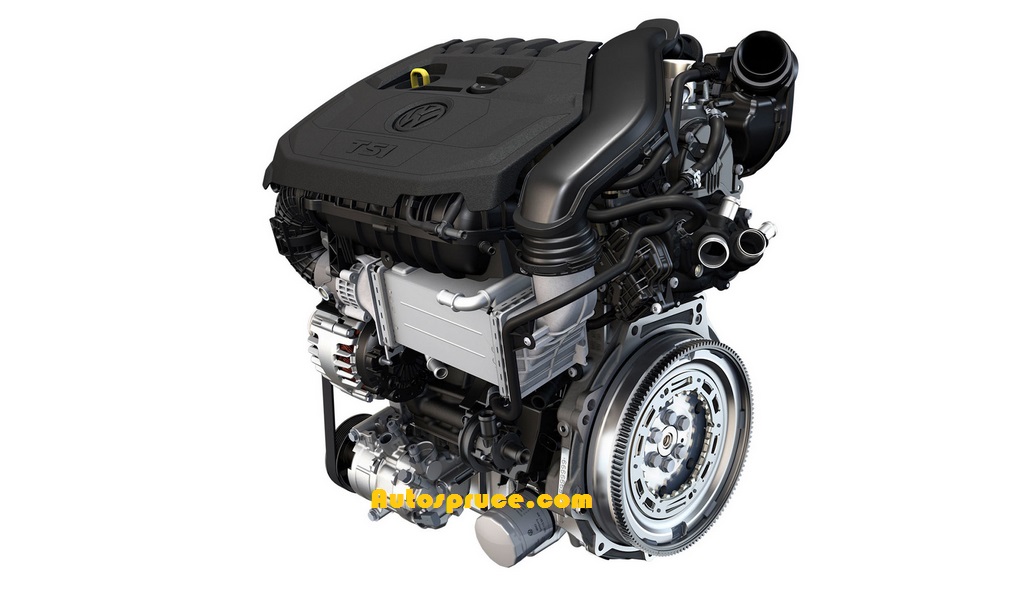 Currently, the new 1.5 TSI engine is offered in most passenger cars of the Volkswagen group. We can find it in Golf, Passat, Tiguan, T-Rock, Sportsvan, Octavia, Superbie, Karoq, Kodiaq, Leon, Ateka.

On a 1.5 TSI engine, the injection pressure is 350 bar, which is large enough for the engine to start a spark.

The 1.5 TSI engine is equipped with an ACT cylinder deactivation system. This is a known system from the previous 1.4 TSI engine. At low load, the valves on two cylinders are closed and the engine runs on the other two cylinders. This allows you to reduce fuel consumption.

The timing is realized by the belt. In line with the Euro 6d Temp exhaust standard, the new 1.5 unit has a GPF particulate filter. It is adapted to work on 0w20 oil. As always, I recommend changing the oil every year or a maximum of 15,000 km.

Sailing mode is available with this engine for the first time in Golf. Driving at a constant speed and without acceleration, the engine is completely dead. This system only works with automatic DSG transmission. Energy for the operation of the electronic system is then provided by the lithium-ion battery.

The 1.5 TSI engine is available in two power variants:

This engine works in a Miller cycle, which allows for reduced losses during compression, and the compression ratio is 12.5:1. The cylinder liner is cast iron here.

An interesting fact is the use of a turbocharger with variable geometry of the VTG blades. Until now, this technology is only used in diesel engines. So it’s a novelty in gasoline engines. The adjustment angle of the blade is realized not by negative pressure, but electronically.

The VTG turbine has significantly increased flexibility and response to gas addition from the lowest RPM. The entire supercharging system, including the compressor, is now adapted to high temperatures – higher in gasoline engines than in diesel engines.

The 1.5 TSI engine in the 150 HP version works in the Otto cycle, and unlike the weaker version in the Miller cycle.

The hundred and fifty horse version has cylinders made in APS technology. The aluminum block has a plasma spray powder that produces a microstructure. Engine oil is stored in it, which makes the oil layer thicker. This makes it possible to significantly reduce cylinder wear in cold work and increase the engine’s resistance to the so-called knock burning.

In this regard, Volkswagen has thought ahead by adapting this engine to work in a hybrid system. APS makes the material resistant to cold starts, and it is under such conditions that hybrids work most often. The 110 kW variant is also equipped with a sodium-filled exhaust valve for cooling purposes.

All that so that the material can withstand the exhaust gas temperature of 1050 degrees Celsius, which is 170 degrees higher than the 130 HP variant. Unlike the weaker version, the 150HP version has a turbocharger without variable geometry.

The 1.5 TSI engine is a very new unit and so far we haven’t heard of any major failures. However, there is a problem that keeps owners of cars of all brands from the Volkswagen group equipped with 1.5 TSI engines awake at night.

There is a problem with this machine when starting. Several readers have also written to us about this. So the problem is quite serious. That is jerking and often occurs in manual transmissions. If you have experience with this machine, please write in the comments below.