The Toyota AE is a C-segment passenger car manufactured by Japan’s Toyota in 1983 1987. The Toyota AE is the fifth generation of the popular Toyota Corolla and is available for sale only as a 2-door coupe or as a 3-door hatchback. 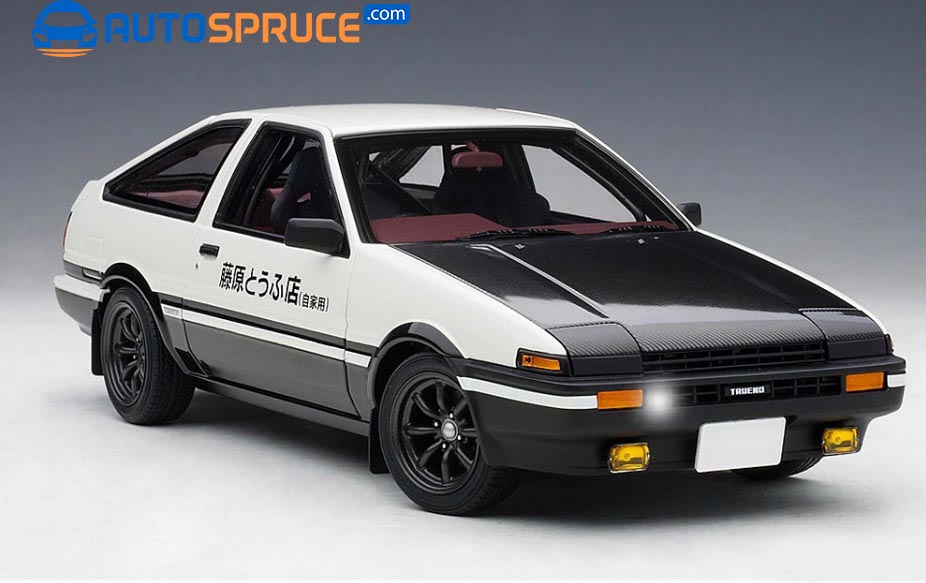 The ever-growing popularity of the AE model has made it appear in series, films and many computer games. A good example is the anime Initial D, where the main character drives his father’s car, namely Toyota AE.

The auto manufacturer once admitted that the increased popularity of the event led to more sales of Toyota AE in Japan. The car appeared on the big screen once again during the filming of the famous Hollywood blockbuster “The Fast and the Furious”.

The Toyota Corolla Levin AE86 version appears in the fourth installment of this series and the famous Fast & Furious: Tokyo Drift ”. The second media that AE models often use is the computer game industry, especially about car racing.

This is how the Toyota AE looks like in the most famous series from Gran Turismo, Forza Motorsport, Tokyo Extreme Racer, GTA IV and Need For Speed ​​series.

What’s new for the Toyota AE is the use of ventilated disc brakes. In this solution, what stops the wheel spinning is the compression disc coated with a layer of friction, and not the calipers used on standard brakes. The introduction of an improved braking system has translated into a suspension design based on the MacPherson system.

It’s also possible to retrofit the Toyota AE with the auto anti-slip mechanism (LSD). When buying a car in a showroom, users can use the R4 gasoline engine with injection fuel. The unit has a capacity of 1.5 to 1.6 liters and is operated by two transmissions, a 5-speed manual and a 4-speed automatic. The engine is located at the front of the structure and drives the rear axle of the vehicle, which in future will be the hallmark of the Toyota AE.

Toyota AE was produced in two different versions in the selection of accessories and a few cosmetic changes to the body. The first version, called Levin (Spanish for thunder), is distinguished by the combined headlamps, while the second Trueno is most associated with AE thanks to its characteristic, retractable headlamps.

The Toyota Trueno version is still often used in drifting competitions, which is the so-called driving method. controlled slip. This is due to the aforementioned rear wheel drive, which allows for better control of the car when slipping.

It is also important to mention the interior of the AE, known for its sporty clock character and reduced steering wheel which users have praised for its improved torque properties. In addition, the basic version of the Toyota AE has electric windows, cruise control, power steering, air conditioning, and even an additional spoiler.

The dimensions of the Toyota AE are not much different from other urban compact cars (segment C). Thus, the length of the vehicle is 4,180 mm, the width is 1,625 mm, and the height from the suspension point is 1,335 mm.

A minor drawback, but still the downside of this car is its own weight, which is roughly a ton (970 kg to be exact). This slows down the Toyota AE, especially on highways where, with the optimal drive system, a lighter weight car can achieve much higher yields.

The fuel tank which only holds 50 liters is also quite small. Therefore, the Toyota AE performed well in the city, coping worse on the intercity route, where drivers often had to stop to refuel extra.

The sporty chassis structure combined with the direct injection engine allows the AE to reach a top speed of 200 km / h. With such performance, due to the high curb weight, acceleration is limited. The Toyota AE took about 9 seconds to hit one hundred, quarter miles in 16 seconds (test according to American standards).

Thanks to the efficient rear wheel drive and drive unit, the Toyota AE generation is used not only in drifting, but also in regular car rallies. This car has been carving out a special career since 1984, when it started competing in the prestigious European Touring Car Championship with a modified engine producing 150 hp, beating rival models the BMW M6, Volvo 240 Turbo, Mazda 929 and Alfa Romeo 75 in 1986.

Unfortunately, to get this model for more than just a complete renovation is almost a miracle. Prices on the market are around $ 3,000, in which you need to invest more. Occasionally, of course, a more well-maintained AE would appear, but soon found a buyer who could afford up to $ 9,000.

Over the years, enthusiasts of old Toyota models have been recommended to Great Britain, where it is easier to find the car of your dreams. There are still many models imported directly from Japan in the UK aftermarket.