A subsidiary of Toyota’s produced 2JZ engine for sixteen years ( 1991 – 2007 g). This three-liter, six-cylinder inline was designed for rear-wheel drive models such as the Mark 2, Crown, Supra, Lexus IS and Lexus GS, the internal combustion engine was modernized, equipped with variable phases VVT-i and ignition DIS-3. 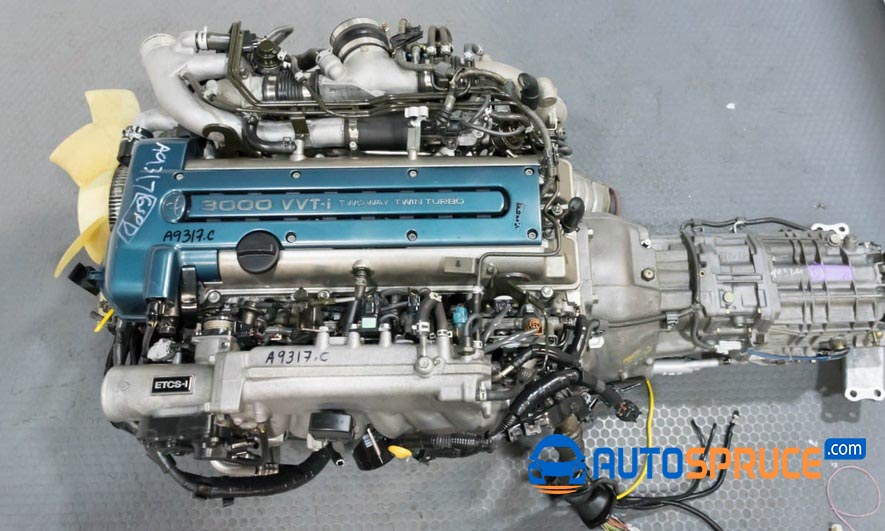 The three liter JZ engine differs from the previously appeared 2.5-liter with an increased piston stroke, in addition, the cylinder block has grown by 14 mm. There were no more obvious differences.

Above the six-cylinder block is the cylinder head and 24 valves. There are no hydraulic compensators, the timing drive is belt-driven. Variable geometry intake manifold 2JZ.

Modernized in 1997. VVTi was installed at the inlet, and the old distributor ignition was replaced by DIS-3.

The list of cars with a 2JZ engine under the hood can be stretched over several pages. Here is a partial list of Toyota models with this engine:

In addition, some craftsmen push it into cars of other brands, for example, a Mercedes and even a GAZ 24.

The 2JZ engine is enviably reliable. The manufacturer claims a resource of 300,000 mileage. Often, with proper care, careful operation, the engine takes care of 500,000 kilometers before overhaul.

Competent maintenance and adherence to the 2JZ maintenance schedule are important for any engine. In this case, the list of routine maintenance:

Let’s consider how much gasoline the 2JZ engine consumes using the example of two cars of the same model, but of different generations.

Rear-wheel drive Lexus GS300 of the second generation with 2JZ has fuel consumption:

The first generation Lexus GS300 with a 4-speed automatic and rear-wheel drive consumes 100 km of track:

The 2JZ engine has a large margin of safety. With a competent upgrade, more than 1000 hp are removed from it. While there is no point in tuning the base 2JZ-GE, it’s easier to buy a car with a sporty GTE. But nothing prevents you from removing 450 forces from him. You can do it like this :

Of course, this tuning is not for thrifty people. The kit will not be cheap, and after alterations, fuel consumption will increase greatly.

But the twin-turbo 2JZ-GTE is a favorite of tuners. There are several options for increasing power. The easiest is to increase the boost pressure. Without changing the turbine, 1.2-1.3 bar can be achieved. In this case, the attachments are subject to modernization. Do this:

In this way, you can raise the power indicator to 400 hp.

To achieve the same power of 400 hp, but at the same time get a smoother torque, a turbo kit is installed :

With such changes, up to 800 hp are removed from the engine. Not enough for you? Then change the pistons to forged, connecting rods to reinforced and modify the cylinder head.

Again, not enough and you want to squeeze more than 1000 forces out of the engine? In this case, change the compression ratio, put on a lightweight flywheel and switch the unit to gasoline with a higher octane rating.

The 2JZ engine has a huge margin of safety, so it is often tuned. But it should be remembered that the increase in power directly affects the resource and reliability. To minimize negative effects, carefully consider the choice of engine oil. Use only high quality synthetic grease.