AutoSpruce.com
Home News The Most and The Least Damaged Cars in Europe Revealed 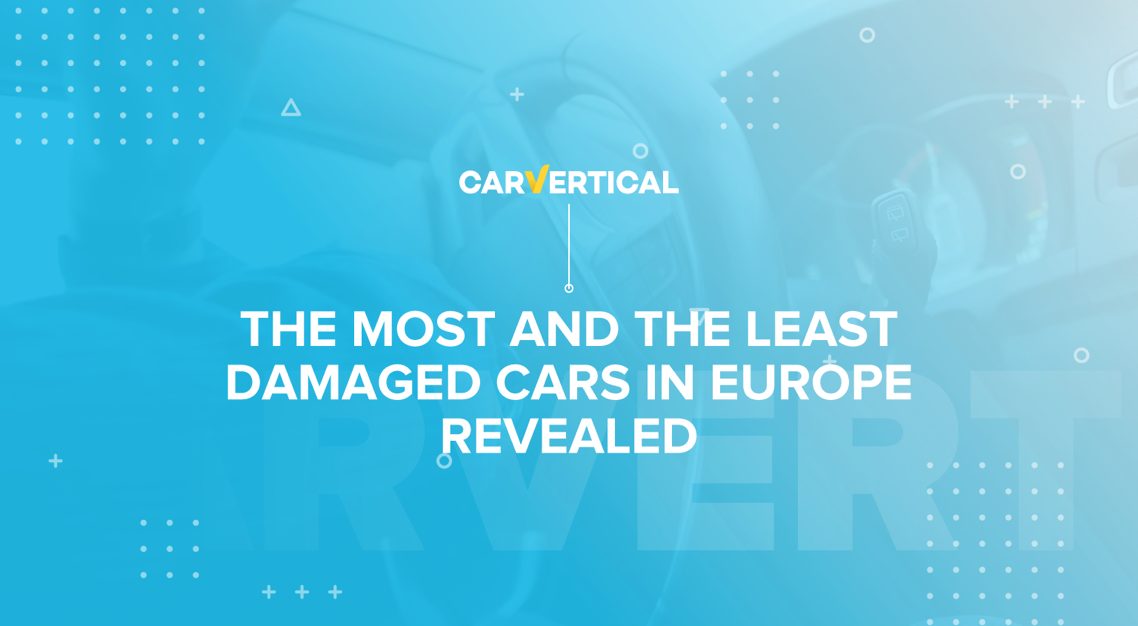 One of the most important goals when considering a used car purchase is to figure out whether it has been in an accident. Once a car’s body is damaged, its rigidity is weakened, which makes any further accidents much more dangerous and damaging for the car and its passengers. Only rarely do drivers invest in proper body repairs after experiencing a crash. Often repairs are cheap, shoddy and with the only aim being to sell the car.

The chance of buying a car that has been in an accident varies depending upon the car’s brand and model. While many drivers look for modern and reliable vehicles, younger, less experienced drivers often focus on power, sportiness and overall image rather than active and passive safety features.

Data source: The research is based on car history reports generated by customers using the carVertical platform. The platform provides vehicle history data using VIN registration numbers, which reveal information about every accident that a vehicle has been in, any parts that have been damaged, and how much any repairs have cost, plus more.

The TOP 5 most damaged cars

This is the list of the most damaged cars in Europe:

The graphic below shows the five car brands in Europe that were most likely to be damaged according to carVertical reports. Note the most commonly damaged models; all cars have different characteristics and are popular with different types of drivers. 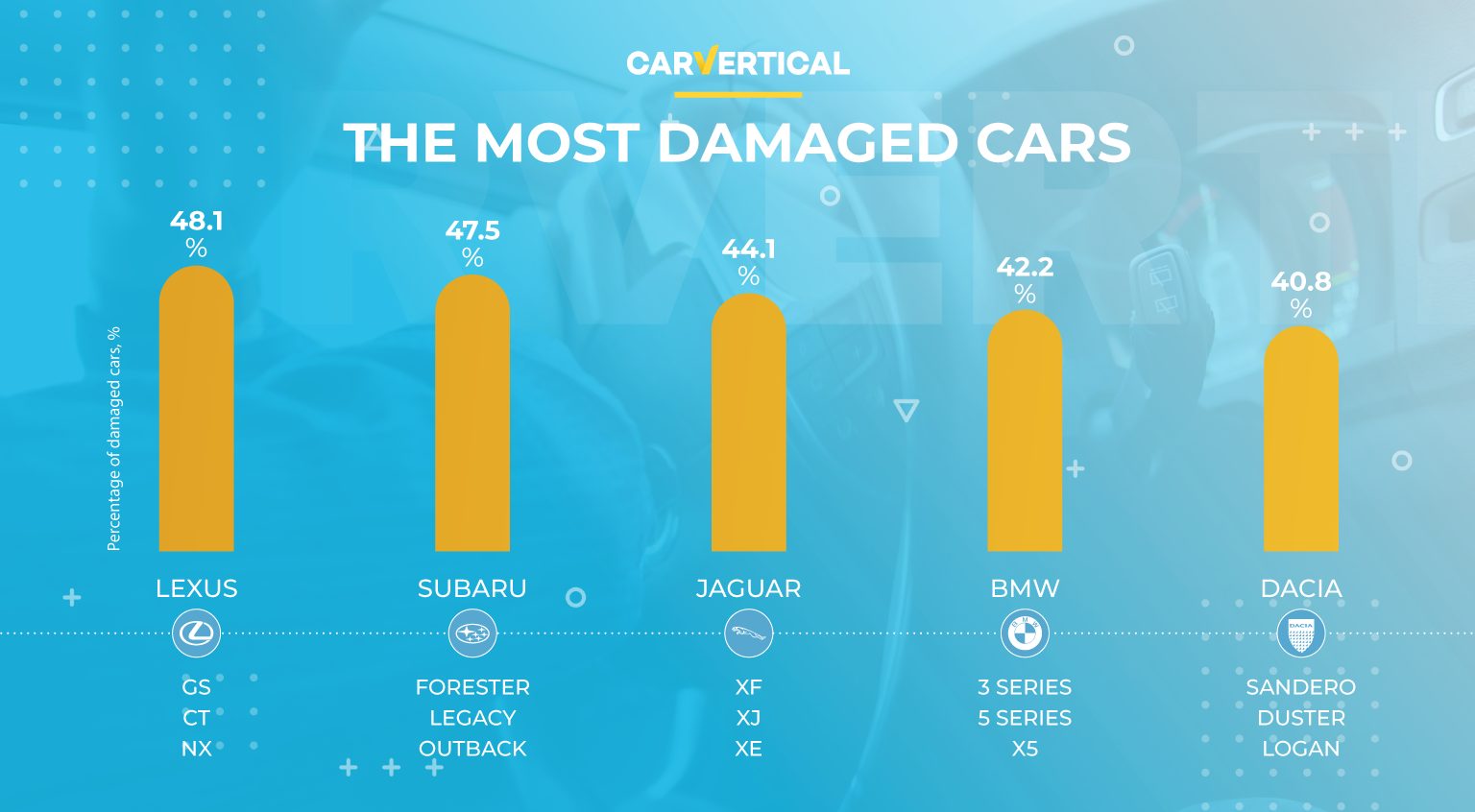 As the research shows, Lexus takes the top spot. This brand’s cars are reliable but powerful so drivers often overestimate their driving skills, which can end in disaster. The same goes for Jaguar and BMW cars. For example, the sporty BMW 3 Series and the Jaguar XF are relatively cheap cars for their type but they are too agile for some.

Subaru takes second place, demonstrating that even all-wheel-drive systems can’t always protect from tricky situations. Those who buy Subarus usually roam outside of the city. Their sophisticated all-wheel-drive (AWD) systems can handle almost any challenge but when forest or country roads suddenly uncover ice or mud, even at safe speeds, you can’t always stop quickly enough.

And then there’s Dacia – one of the cheapest car brands in the world. They manufacture minimalistic cars for those prioritizing their budget. Because of affordability, Dacias are often used as workhorses, and accidents can happen because of a lack of care.

This is the list of the latest most damaged cars in Europe:

The graphic below shows the five car brands in Europe that were least likely to be damaged according to carVertical reports. It is striking that, even here, percentages are relatively high; there are no car brands with smaller percentages because even where there is only one culprit in a road accident, often multiple vehicles are involved. 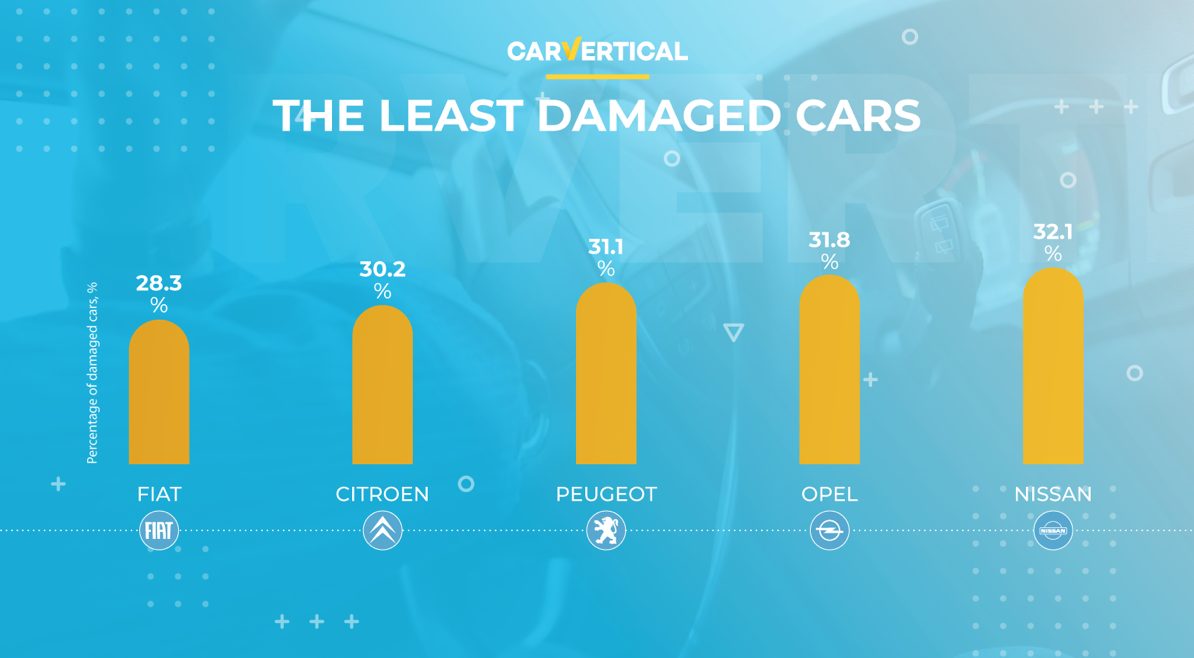 These results reveal that a brand’s desirability and car characteristics affect the chance of being involved in an accident. For example, Fiat only produces compact vehicles. Citroen and Peugeot brands mainly offer affordable cars with engines producing around 100-150 HP. Such characteristics rarely fulfill the needs of those who are keen to accelerate quicker and push above speed limits.

The 10 countries with the highest percentage of damaged cars

During the study, carVertical analyzed car history reports from different European countries. The results in the graphic below highlight in which countries the percentage of damaged is the highest. 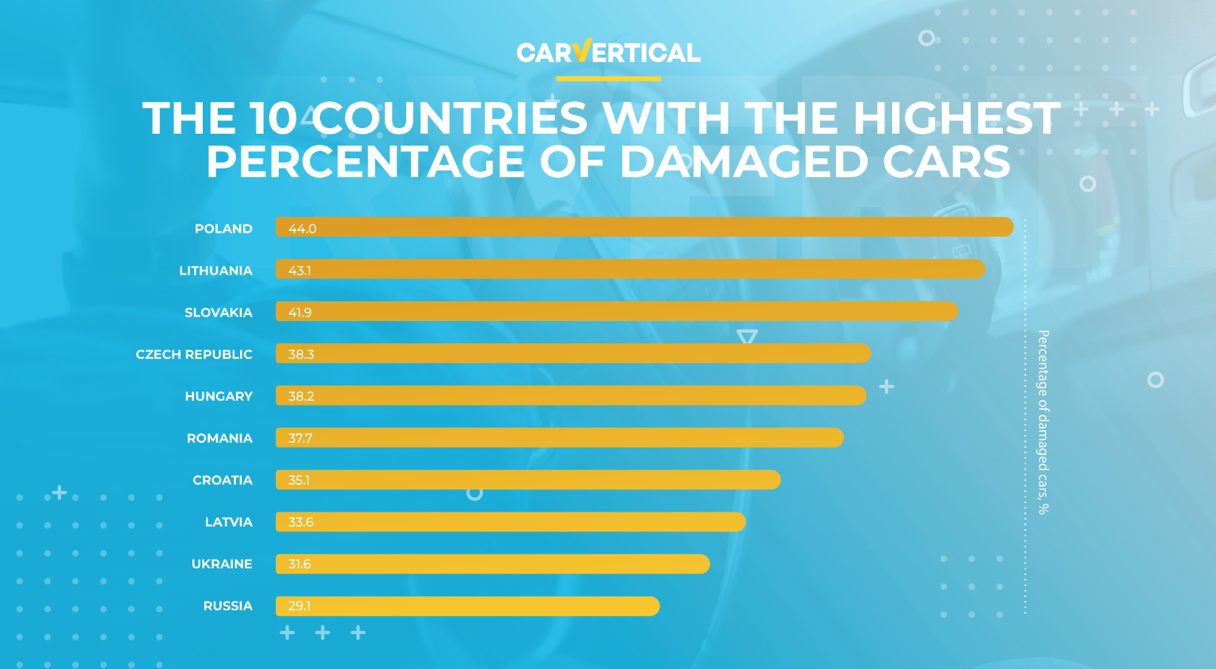 This variation is likely a result of different driver habits and country economy levels. Those living in countries with a higher gross domestic product (GDP) can on average afford newer vehicles. And when it comes to parts of Europe where wages are lower, it is more likely that cheaper, and sometimes damaged, cars will be imported from abroad.

Drivers’ habits and needs also affect these statistics. However, previous research into this has been limited. This is because some markets do not have online data, meaning that insurance companies have had very little digital information regarding car damage and passenger characteristics.

Nowadays, car accidents are an expanding problem. Texting, making calls, eating, drinking – drivers perform increasing amounts of activities, which, sooner or later, result in traffic accidents. Moreover, engines are becoming increasingly powerful and humanity is near the limits of its multitasking abilities while driving.

Properly fixing a car after an accident is often expensive, and not everyone can afford it. The original body rigidity has to be restored, airbags replaced, etc. Many drivers find cheaper, less safe alternatives. That is why today’s roads are seeing increasing numbers of unsafe used cars.