The FA20 is a completely new two-liter engine with an aluminum cylinder block. It is compact and takes up minimum space in the engine compartment. 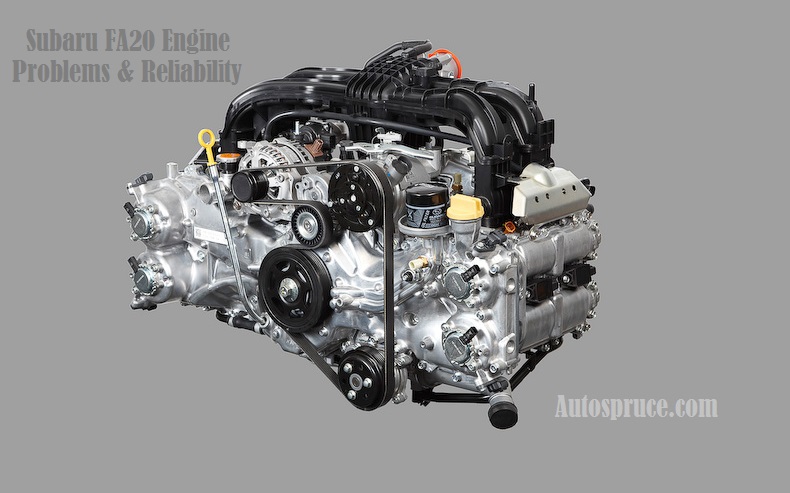 With its power ratings, this engine consumes a minimum of fuel, having fuel economy indicators in mixed mode at 7.8 liters per 100 kilometers. For a mid-size crossover, such fuel consumption figures are almost record-breaking.

Note that in 2014, on the basis of this modification of the power unit, a turbocharged engine was released, which received the FA20DIT index. This Subaru engine developed a power of 272 horsepower, but it was not popular with buyers, since the FA20DIT with a turbine installed had pronounced dips at low speeds.

This engine uses a reliable injector with a direct fuel injection system, which ensures the most complete and high-quality combustion of the fuel mixture in the cylinders.

During the development of its new engine, Subaru actively cooperated with specialists from Toyota, therefore, separate systems are installed on this engine under license from Toyota. For example, a direct injection system is installed on Subaru engines, which is also installed on new modifications of Toyota power units.

We note the presence of a special system for changing the gas distribution on the exhaust and intake camshafts. This ensures maximum flexibility in the operation of the power unit, and also improves its environmental performance.

It should be noted that the Subaru engine was originally designed to use high-octane fuel. Therefore, it is imperative to use high-quality 98 gasoline, which will be the key to the trouble-free operation of this power unit. But attempts to save money and fill the gas tank with 92 or 95 gasoline lead to rapid burnout of the rings and problems with the valve system.

We also note the criticality of this engine to the quality and regularity of the service performed. That is why oil changes and other service work on the engine must be carried out in full compliance with the manufacturer’s requirements. Otherwise, the car owner will face the need to carry out expensive complex repairs.

This engine modification uses a timing chain drive, which simplifies vehicle operation. However, even such a reliable chain system will require proper maintenance. It is recommended, after 250-300 thousand kilometers, to replace the chain, which by this time can be stretched, which is accompanied by characteristic knocks when accelerating.

The new engines have a fully automatic control system that controls all modes of engine operation, improving its behavior at low revs. This made it possible to solve a problem typical for all boxer engines, when a thrust failure was noted at low revs. The use of this fully automatic steering system ensures Euro 5 compliance and improves fuel efficiency.

The Subaru Forester FA20 engine has the following characteristics:

The FA20 engine is installed on:

A characteristic feature of Subaru engines is their boxer type, in which the cylinders are located with a camber angle of 180 degrees. This arrangement allows to remove the power of 253 horsepower from the four-cylinder two-liter naturally aspirated engine.

With a conventional V-shaped or in-line engine, this power would have been impossible without a turbocharger. Whereas this power unit lacks a compressor and a turbine, which has a positive effect on reliability indicators.

In general, this Subaru engine turned out to be quite reliable and, with proper maintenance, does not cause any trouble to its owners. You just need to remember about the mandatory condition of using 98 gasoline and original high quality oil. Moreover, it is recommended to change the lubricant two times more often than in the technical documentation for this car. That is, such service work should be carried out every 8000 kilometers.

In 2012, the Japanese automaker, Subaru, introduced the fourth generation of its popular Subaru Forester crossover, which received an updated gasoline naturally aspirated engine with increased power at its disposal.

The most popular was the Subaru engine with two liters of volume and a capacity of 253 horsepower. This engine received the FA20 index and has proven itself exclusively on the positive side.