Rolls-Royce was created in 1906, when car dealer Charles Rolls and engineer Henry Royce started working together. They wanted to build the best car in the world, with the best technology and the highest quality. They did, with the Silver Ghost built nearly 8,000 times from 1907 to 1925. In 1931 Rolls-Royce took over Bentley and from World War II onwards, Bentleys and Rolls-Royces often showed strong similarities. In the 1960s, Rolls-Royce introduced the series-produced Silver Shadow, which appealed to a younger audience of performers and artists who demonstrated their success with their cars.

In 1971 Rolls-Royce went bankrupt due to the enormous costs of developing aero engines. The car division was split off and nationalized in 1973. In 1980, the car manufacturer as Rolls-Royce Motors was taken over by defense company Vickers, which continued to produce Rolls-Royce and Bentley side by side.

Since 1998, Rolls-Royce Motor Cars, as it has since been called, has been wholly owned by BMW, after protracted haggling with Volkswagen, which had taken over Rolls-Royce and Bentley from Vickers. However, that deal did not include the use of the logo on cars, which still belongs to the aircraft engine manufacturer Rolls-Royce plc. used to be. It sold the rights to use the logo to BMW, which already supplied engines to Rolls-Royce. Until the end of 2002 BMW continued to supply engines. However, BMW was able to get rid of the engine deal after a year, so that Volkswagen no longer saw any point in retaining the rights to build Rolls-Royce cars. It therefore sold Rolls-Royce to BMW and retained Bentley. Rolls-Royce has been wholly owned by BMW since 2003.

The Rolls-Royce emblem is of course the well-known RR logo. Just as famous is the statue on the radiator grille, the Spirit of Ecstasy. In 1909 the statue was created by the English artist Charles Sykes, who was friends with Rolls and Royce. Actress and model Eleanor Thornton modeled. 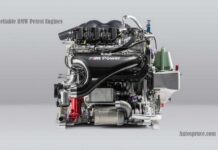 The Most Worst And Reliable BMW Engine Reviews

Rolls-Royce Jasmine Lee
1
When buying a used BMW engine, the issue of the engine is even more important than with other, cheaper cars. Here, the emotions of...