Ferdinand Porsche founded his own construction office in 1931. He had already built up a good track record at various car manufacturers. From 1934 onwards he developed the KdF car, the Volkswagen, on behalf of the German government. The first Porsche to appear on the market was the 356 in 1950, which Porsche had developed together with his son Ferry. At the start, the 356 still had a lot in common with the Volkswagen (Beetle), but Porsche continued to develop the 356. Its successor, the 911, appeared in 1963. This type, albeit in a greatly modified form, is still part of Porsche’s range. The 928 was the intended successor to the 911 in 1977 and was voted Car of the Year 1978.

Porsche has always had close ties with Volkswagen. In 1969 the Volkswagen Porsche 914 appeared, for which the four-cylinder engine came from Volkswagen and the six-cylinder from Porsche. The collaboration continued with the 924, which appeared in 1976. The model was to become Volkswagen’s top model, but Volkswagen withdrew and Porsche launched the model itself.

Only since 1954 has the Porsche logo adorned the nose of the sports cars from Zuffenhausen. Central to the logo is the prancing horse of the city of Stuttgart, in the background of the coat of arms of the state of Württemberg. 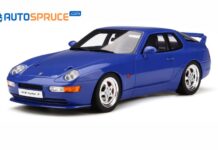