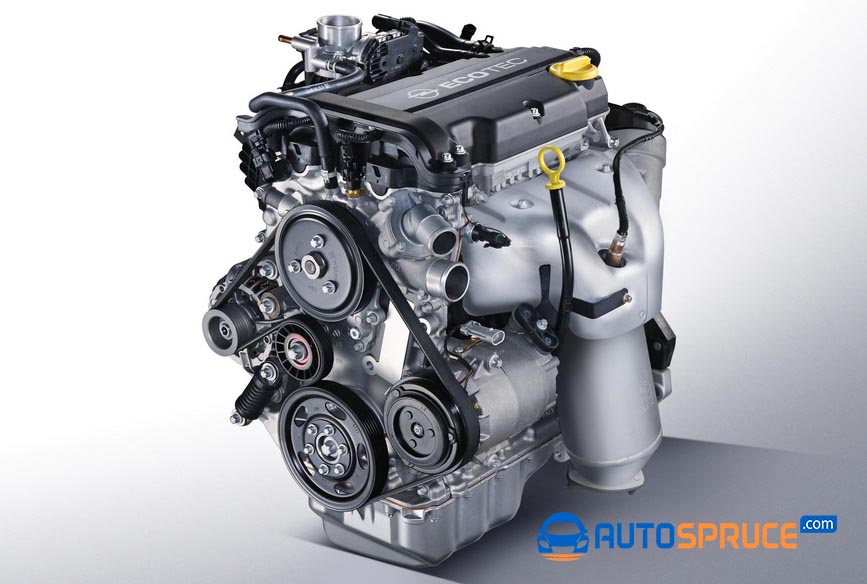 What’s new about what? Based on TwinPort technology. What is this? Since the engine has 4 cylinders and 16 valves, there are two valves for each cylinder to supply the air / fuel mixture. Germany uses a system of inlets of variable length in each of these pairs. And this one is a small throttle that is inserted into a channel leading to one of the valves.

How does the TwinPort system work? Under heavy loads – that is, above 4,000 rpm. – the two intake valves on each cylinder are fully open. When the load drops, the damper in one of the channels closes. By reducing the diameter of the through passage, an air vortex is created.

This is responsible for lowering fuel consumption while maximizing engine power. Regardless of the variable length of the inlet and usage of the timeline, the Ecotec Z14XEP’s 1.4 TwinPort engine is essentially no different from the famous EcoTec engine from Opel’s lineup in the nineties.

Opel’s 1.4 TwinPort engine is called the Z14XEP. It’s a relatively simple construction, which unfortunately has some of the characteristic drawbacks of naturally aspirated petrol cars. Example? To force the engine under the hood of Astra II to accelerate dynamically, you have to keep running.

This means high fuel consumption. In the city, fuel requirements can even exceed 10 liters! Luckily the 1,364 cc engine has good information for the driver. The valve lash adjustment is hydraulic and automatic. And this paved the way for LPG installations.

The Ecotec Z14XEP’s 1.4 TwinPort engine fits perfectly into the Opel canon. What does it mean? That is, this machine really likes to eat oil during operation! The lubricant consumption may initially be marginal. Over time, your petrol engine appetite will increase and become bigger.

After traveling every 1000 kilometers, the engine can lose up to one liter of oil. To send the Opel engine to an oil diet, renovations were needed. The best option will be priced by a mechanic for around $ 550. The high amount, coupled with the age of the car, makes many drivers prefer to fill the oil during operation.

Another issue of the Ecotec Z14XEP’s 1.4 TwinPort engine is with the time chain. The manufacturer claims that the element is maintenance free – this means that you do not need to control its condition and must last for the life of the machine. In practice, it can stretch even before it has exceeded the distance of 150,000-160,000 kilometers.

In this case, it makes noise and causes a significant reduction in power. Why is chain durability so low? Perhaps it is not the drive itself that is to blame, but rather the problem with “eating” oil. If the driver does not refill regularly, the low amount of lubricant will get stuck in the tensioner and cause the chain to stretch.

There’s also an undulation in the Opel 1.4 TwinPort Ecotec Z14XEP engine. However, this is usually caused by a clogged EGR valve. The German petrol engine, despite its disadvantages in oil consumption, seems to be a very good design.

These units can cover distances of up to 400,000 kilometers without major repairs. And it’s not over yet, because auto shops also have good news for owners of cars with this bike. The price is very low! Example? A set of coils for four cylinders costs a little over $ 55, a clutch set costs $ 65, while an EGR will cost $ 70.

Many voices say that the Opel 1.4 TwinPort Ecotec Z14XEP engine is not suitable for gas operation. However, there are also satisfied drivers who have managed to use the installations on their Astra and Corsas.

So what does it take to be successful? First, an efficient engine. Second, a well-chosen LPG installation. Third, gas workers who know a lot about their work. Fourth, regular service! Yes, a dedicated power supply system for Opel engines can cost $ 680. However, due to the large imbalance in fuel prices, this expenditure was able to recover quickly.