The RB26DETT engine was installed mainly on the Nissan Skyline GT-R in the body of the R32, R33 and R34, Nissan Stagea 260RS. This engine was developed by Nismo to drive Skyline R32 GT-R in car racing. The engine has high potential to increase its power, so the RB26DETT has gained worldwide fame. 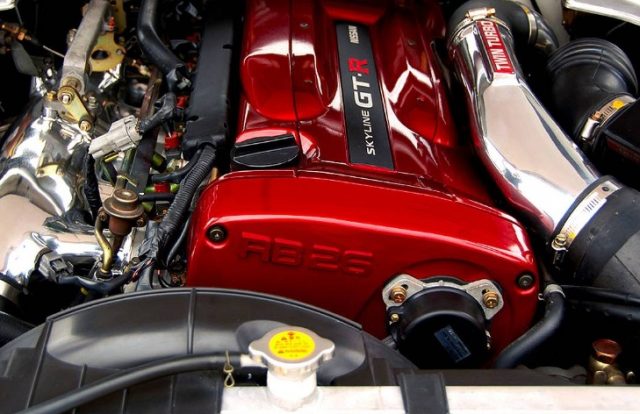 The timing is driven by the timing belt. The RB26DETT intake system, unlike other engines in the RB series, has 6 throttle assemblies, not one (one throttle for each cylinder). This engine is equipped with two turbochargers (T28 ceramic turbines). Such a system is called – parallel turbocharging or Twin Turbo.

The engine turned out to be quite reliable and easy to maintain 150 thousand km or more with proper maintenance. For engines up to 1992, there might be problems with oil starvation at high speeds. Over the years of production and modification, machines on the mechanical side have practically not changed. The change concerns machine control units – different generations set themselves.

Inline six-cylinder petrol with an electronic fuel injection control system, with cylinders and pistons in alignment rotating one ordinary crankshaft, with an array of two camshafts, with two turbochargers (the first turbine of cylinders 1, 2 and 3; the second of 4, 5 and 6). The machine has a closed circuit liquid cooling system with forced circulation. Combination lubrication system: under pressure and spray.

What Car is Installed RB26 Engine?

If you don’t consider the popularity of RB26DETT as a donor for swaps and sports projects, then their factory is equipped with a small number of Nissan models.

The famous Nissan RB26DETT engine, an old rival of the Toyota 2JZ-GTE, came out in 1989 to match the sophistication of time – a 32 inch Skyline – and won in the Japan Touring Car Championship.

The RB26DETT motor is similar to the smaller RB25DET. It is equipped with a cast-iron cylinder block without oil lines, a high-strength crankshaft with a new 73.7 mm short piston stroke, a rod that holds 500 or more horses in stock, and a compression ratio of 8.5 in the cylinder.

The aluminum head block contains 24 valves: 4 per cylinder, inlet diameter 34.5 mm, exhaust 30 mm. Camshafts with phase lifts 240/236 8.58 / 8.28 mm. The VVTi mechanism is not used, nor is there a hydraulic lift, on the contrary, a rigid push rod works. When the timing belt is broken, RB26DETT bend the valve.

First of all, these changes affect the performance and volume of water pumps, oil pumps, oil line improvements for adequate lubrication and cooling at maximum speed.

Increased strength, balanced corrected crankshaft connecting rod, piston is now in the upper compression ring with a thickness of 1.2 mm, and the camshaft phase changes to increase torque.

The non-ceramic steel turbine wheels are now installed in the RB26DETT N1 turbine: they are stronger, resistant to submaximum rotation speeds. The standard 86 mm cylinder remains the same diameter on the N1, but is easily upgraded to 88 mm. As a result of modernization, the power indicator has increased to 510 hp, and hypothetically 1900 and more horses can be drawn.

Nissan designers awarded the RB26DETT engine with exceptional reliability, but it cannot be without problems.

The development of Nissan’s power units in sports and racing cars has been so successful that it still claims to be a world leader in various categories, and holds leadership in terms of reliability and resources. The RB26DETT engine has been one such example, which has long been remembered by the global automotive community as an unforgettable model of power, speed and emotion.

The turbocharged Nissan RB26DETT engine with a volume of 2.6 liters was produced by Nissan in the period 1989 to 2002. This machine is equipped with three generations of Skyline, Stagea wagon station. It belongs to the RB25 family, where this engine is a turbo version consisting of RB25DE and RB25DET Engine.