When describing V8 diesel engines, they can all be boiled down to one sentence: they will be expensive. It is almost certain, but even among these engines there are better and worse designs that can be recommended and, for various reasons, advised against. What is worth knowing about them so as not to hit a mine? 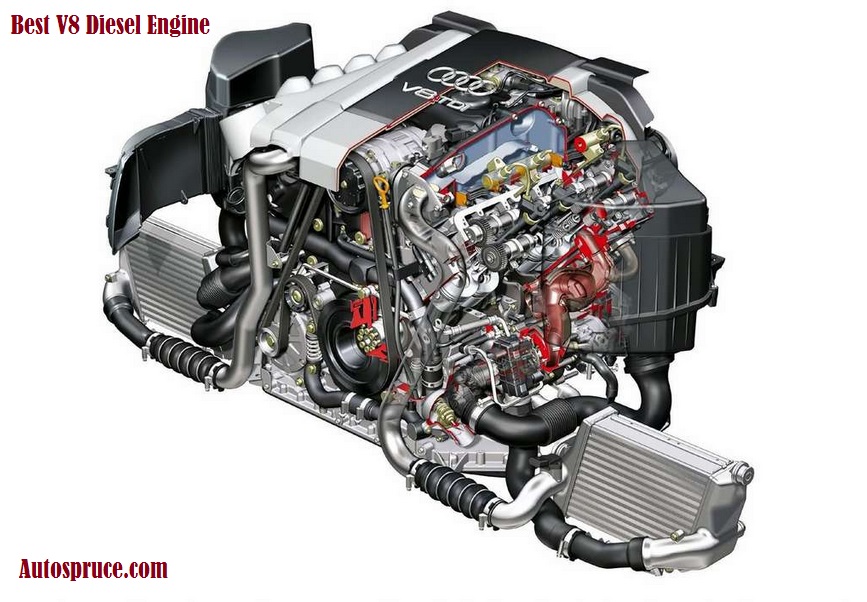 The V8 diesel engine on the European market – apart from trucks – has always been treated as a whim. In practice, it is used only in higher-class cars. Theoretically, it has mutually exclusive features. Because on the one hand, it offers very good performance, which is also provided by V8 gasoline units, and on the other hand, it is installed in expensive cars, which means that customers using such cars can rather afford fuel. It is not about economy, although it must be admitted that a V8 diesel will burn less fuel than a V6 gasoline.

There is a logic in this paradox. It’s mainly about range. It is not fuel consumption that is important in itself, but how often the driver of such a car will have to stop to refuel. With parameters better than those of gasoline engines with 6 or even 8 cylinders, it is possible to cover a distance of 2-3 times longer on one tank . Moreover, the V8 diesel is an excellent machine for towing heavy trailers.

Today, few manufacturers use such a drive, because the V8 diesel has not only lost to exhaust emission standards, but you can also get the impression that the very high production costs have added its 3 cents. And it is not even about the cost in itself, but about the possibility of installing such an engine. While the R6 or V6 engine will fit in a middle class car, and after adding 1 or 2 turbochargers it will also efficiently drive a large limousine or SUV, the V8 diesel will only fit a car with a large engine compartment. So why create 2 engines when you can make 2 versions of one?

An example is the BMW brand, which installed the V8 in the 7 Series for 2 generations, and with the launch of the F01 replaced it with a smaller but more powerful and more efficient 6-cylinder engine. The 2 generations of the Mercedes S-Class also withstood a V8 diesel, eventually replaced by a V6 and then an R6.

Audi stands out from its German competitors, which in the A8 uses diesel with 8 cylinders from the first to the current generation. It was also used in other models, such as the Q7 and Q8, as well as the Volkswagen Touareg and Porsche cars. Does this mean that only the VW group has managed to fine-tune the V8 diesel?

The first trials with the V8 diesel began in 2000, when the 3.3-liter variant debuted in the A8 D2 model. Along with it, a more powerful version of the 2.5 TDI engine appeared. Interestingly, both designs have one thing in common – high risk of camshaft seizure. Both engines are commonly considered unsuccessful and hardly anyone recommends the 3.3 variant with a clear conscience. The problem has one more face of this construction.

While the 2.5 TDI diesel is well known and dealt with by mechanics, the 3.3 TDI is not very popular and not everyone wants to repair it. In addition, access to spare parts is limited, because they were used only in one model, which also raises their price to the level of unprofitability for a 20-year-old car.

While the career of the above-mentioned unit was rather short, its successor – the 4.2 TDI – enjoyed the saying for a long time. However, before it settled for good in Audi, then Volkswagen and Porsche, it was preceded by the 4.0 TDI engine (only for 3 years). Unfortunately, it does not have good opinions – both in terms of durability and reliability. It is not recommended.

The 4.2 TDI diesel (with a capacity of 4.1 l), which can be considered a successful design, is different. Withstands without major failures approx 300,000 km and then the attachments usually need to be repaired. It has a complicated and expensive to replace timing drive , but quite durable piezoelectric injectors, although expensive. If we assume the worst-case scenario, that the bike is good, but the accessories need to be regenerated here and there, the expense of $2600-$3900 is also an optimistic variant.

However, on the other hand, when looking at a car such as the second generation Porsche Cayenne, it is a better source of propulsion in this car. If you want to comment on the dynamics, I would like to remind you that the engine develops 385 HP of power and 850 Nm of torque!

The newer V8 TDI engines from the VW Group have “come back” to a displacement of 4.0 l and cannot be assessed well at present. It must be admitted, however, that the parameters of these 400 hp units look very encouraging. For example, the A8 60 TDI generates as much as 900 Nm of torque.

The V8 diesel with the M67 designation was used for a short time, only for 10 years. This motor has never overshadowed a true legend among BMW engines – the iconic M57 and its newer N57 variant, which showed the V8 where it belongs.

It is a more successful 6-cylinder in-line design than some major problems with the V8 made it a thing of the past in 2009 and it has never been under the hood of a model other than the Series 7. It is worth knowing that it was used in a Siemens tram.

Only 2 significant variants appeared in the history of this engine, differing mainly in capacity. The early version was 3.9 l and the later 4.4 l. There is also a big difference in power. The smaller unit generated a maximum of 258 hp, while the larger one – a minimum of 300 hp.

Although, in principle, the M67 engine does not have particularly significant drawbacks , it is difficult to recommend it in the face of such a good unit as the M57, which can easily be turned up to 300 hp. Moreover, for the price of a good service, your old V8 can almost be refurbished and tuned to the R6, while enjoying an engine that doesn’t need to be removed for any major repair. The costs of almost all activities are very expensive and it just isn’t worth getting into.

A decent, durable engine, which is a refined structure from the very beginning, is not without its drawbacks. The career of the 4-liter diesel with the designation OM 628 (later OM 629) was as short as the M67 from BMW. But it has developed much more. This motor found its way to several Mercedes models – S-Class, E-Class, G-Class, GL and ML. It works especially for the latter, although the ML is generally not a highly regarded car.

The engine was initially not very powerful, but its enormous torque – a minimum of 560 Nm – is both an advantage and a disadvantage. Cars of this brand, equipped with V8 diesel engines, are known for the low durability of the automatic transmission. Unfortunately, a bearish force combined with a heavy driver’s leg produces this effect. The engine itself is very good.

With proper treatment, it will travel 300,000 km without major problems , but during this period you will have to intervene in the injection system at least twice. Especially the early 400 CDI versions. The costs of service and potential repairs are high, but thanks to the application in several models and their great popularity, there is no problem with access to parts, including used engines.

Later variants designated as OM 629, and models 420 and 450 are even more powerful – minimum 700 Nm. Unfortunately, they also have more complicated hardware, so repairs are more expensive. Nevertheless, I think that it is a better choice than the less popular BMW V8 or even the 4.2 TDI from Audi.

When looking for information about the TDV8 diesel used in the Range Rover L322 , you may come across 2 different sources. Some say that it is a PSA construction, others that a Ford one.

The truth lies in the middle. The engine belongs to the Lion family, which also includes the well-known 2.7 HDi and 3.0 HDi units in the V6 configuration. This is a series of engines prepared by Ford, although some of the equipment comes from PSA and it is the French who used these engines the most. Just not with V8.

The designations of these engines are used interchangeably, but under the hood of the Range Rover there was a motorcycle with the designation typical for PSA, i.e. DT17. However, we are dealing here with the design of the Ford, and it was so elaborated that it was also supposed to go to the utility Ford F-150, although it was eventually abandoned due to the overly complicated structure.

The capacity is typical for cars of this brand, which is not very large, because only 3.6 l. With 272 HP and 640 Nm of torque, it is the right source of drive for this heavy SUV. Although I generally do not recommend the Range Rover L322 for a person not very aware, it is the TDV8 unit that turns out to be one of the safest. The older TD6 diesel (produced by BMW) will be even better, but then we are dealing with an older car.

Although V8 diesels look very good on paper, they were often used quite extensively for the first few years, and the cars were passed on to other people who could not afford to properly maintain them. As a rule, they reliably cover 300,000-400,000 km , and then generate such costs that you think more in the “drive” category than full fitness.

Therefore, it should not be surprising that there is a lot of neglect and a high probability of unprofessional (read cheap) repair. What’s more, due to the high work culture of such units and excellent parameters, the engine is often treated as efficient, although, for example, one or two injectors or one of the turbochargers is barely running.

Also, do not expect real mileage lower than 300,000 km. While it is absolutely not true that the Germans drive more than we do, the fact is that they do not buy high-capacity diesel only for commuting to the church. The fact that the car is in great condition does not mean that it did not drive motorways at speeds above 200 km / h on longer stretches.

Another aspect is very high torque, which significantly affects the durability of the drive system components . The engine may be in good condition, but frequent use of its enormous torque puts a lot of strain on the converter and automatic transmission. For this reason, it is worth thinking about the car as a whole, not just the engine.

The most risky in such an engine are more serious faults . It is not about the fact that, for example, the V8 diesel has 2 turbochargers and the R6 diesel ones. There is also the question of access to the entire system, and the V8 unit in a European car is always tightly packed. As a result, not even parts, but labor costs are skyrocketing.

Moreover, for more serious repairs, the V8 diesel has 2 heads, 2 turbochargers, 8 injectors, 8 glow plugs , often 4 camshafts, often a minimum of 2 chains, and so on. Compared to a comparable unit, the R6 is extremely complex.

So if you are looking for a few or a dozen years old V8 diesel car for some reason, you should be aware that if you buy a car with a defective engine, you have to take into account 5-digit expenses, and repair costs at the level of $2600 should be considered a stroke of luck.