AutoSpruce.com
Home Engines Most Reliable Small Diesel Engine Ever Made

If you need a used car with a small diesel engine, even though the repair costs are very high, there are several attractive offers on the market for you. These cars won’t demand much of you, as long as you can take care of them. 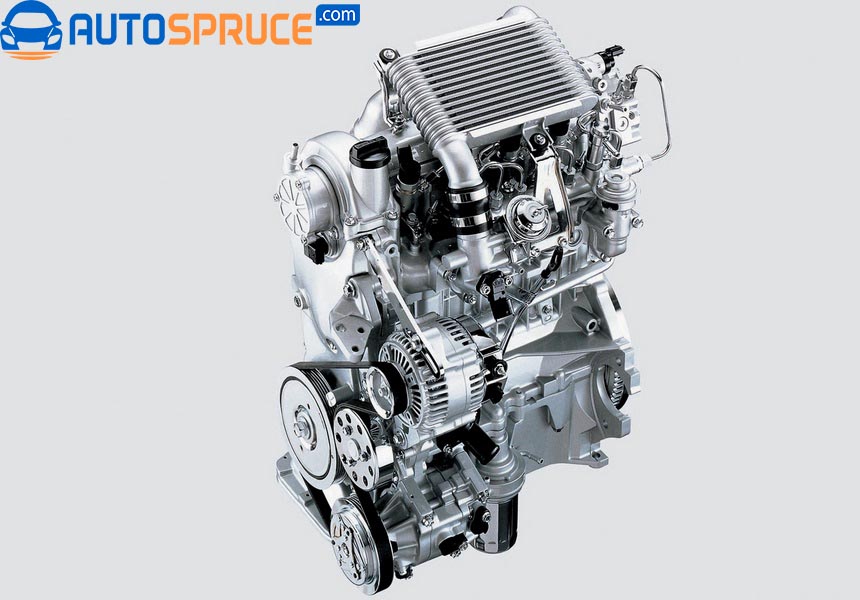 This Most Reliable Small Diesel Engine Ever Made:

Here’s our overview of car models with small diesel engines of up to 1.5 liters that won’t break your budget.

A small and economical diesel engine designed with city cars in mind, made its debut in 2001 on the Peugeot 206, and over time it became part of the smaller model PSA family, as well as for Ford, Mazda and Toyota cars. Until 2010, it was a very simple design without double mass wheels and variable geometry in the turbocharger.

Depending on the car model version, the small 1.4 HDI diesel engine reaches 54 HP, 68 HP or 90 HP. We do not recommend the latter, as it has a variable geometry turbo, Delphi injection and many design flaws. Only since 2008 the installation of a diesel particulate filter was not a big deal for this tiny diesel engine. Unfortunately, Ford uses dual mass wheels on the Fiesta / Fusion model.

The basis for long-term, smooth operation is a 5W-40 oil change every 15,000 km and a timing belt every 200,000 km. Every 100,000 km, the additional drive V-belt together with the crankshaft pulley must be replaced (absolutely necessary!). It is not durable and can fall suddenly while driving, which you don’t want.

The 1.3 JTD small diesel engine is known among other things in the small Fiat car model, known for one feature its low repair costs. Despite the many variations in power, dual mass wheels were not used, even in the most powerful variants with the exception of the Opel Corsa and Suzuki Swift.

Initially, this small diesel engine was offered in a 70 HP version from 2003, but after two years 75 HP and 90 HP engines were added to the range. In 2009, a more powerful 95 HP variant with a DPF filter and a new generation Common Rail MultiJet injection appeared. The top 1.3 MultiJet engine makes 105 HP.

The 1.3 JTD / MultiJet small diesel engine variation can be divided into two generations: up to 2008 and from 2009. The latter already has a standard DPF filter and is a little more complex. The simplest variants are 70, 75 and 90 hp. They don’t have double mass wheels, but you have to be careful with the clutch, which is not very durable. However, the price is low up to $ 105.

What should you pay attention to during operation? Especially for oil. Fiat recommends replacing every 20,000 km and you can stick with the original Selenia WR 5W-40. If not, you should reduce this mileage to 15,000 km. Also, be sure to check the oil level, as a slight deficiency can lead to a low capacity of the lubrication system.

Engine oil is essential for chain timing drive. The oil tensioner may not function properly when the lubricant runs out or is low. In theory, the timing drive is not replaced, but workshop practice shows that ignoring oil can make noise at 100,000 km. Luckily, repairs are inexpensive.

The French engine rose to prominence, partly from the failure of the crankshaft bearing and injection system, but contributed to the dynamic development of small engines in French automobiles. In production since 2001, this small diesel engine is perfect for small cars. At the same time, contrary to popular belief, it can be cheap to operate.

Almost everyone interested in motorization knows that the 1.5 dCi engine has a design flaw in the crankshaft bearings. However, not everyone is aware of the fact that they flip when the oil is changed too infrequently, and most engines on the market either repair or have never had this problem.

In practice, you can buy a car with an engine from 1.5 dCi to 82 HP and enjoy very cheap operation. Even the prophylactic replacement of bushings is not associated with high costs about $ 250. The injection system can cause more problems.

This small diesel engine is equipped with two types of Common Rail injection manufactured by Siemens and Delphi. The former are very durable, but expensive to repair. The second is slightly cheaper, but definitely less durable. We recommend Siemens, which you will recognize by its stellar looking injection pump.

We recommend the simplest and cheapest version of the repair up to 82 HP. The dual mass has no wheels and is usually equipped with a turbocharger of a fixed geometry. In cars until 2005 you will not find a diesel particulate filter.

How should the engine be operated? First of all, the oil is changed every 10,000 km with a 5W-40 synthetic lubricant. It must be very careful. If you buy a car considering the operation of several years, it is worth considering a preventive replacement of the bushing, if it has never been done and the engine has covered at least 200,000 km. Change time drive every 100,000 km or every 5 years.

VW’s most popular small diesel engine, the 1.9 TDI, has three cylinders and is fitted to a smaller model older than the Volkswagen Group. This engine is also installed on the Audi A2, Škoda Fabia and Seat Ibiza. The advantage is very low operating costs, but also has one serious technical drawback.

The disadvantage is the formation of axial play on the crankshaft, which in practice cannot be eliminated. When buying a car with this small diesel engine, it should be checked, but we doubt the seller will approve it, given the low price of the car. Therefore, you can take the risk if the engine runs smoothly, there are no dashboard messages and there are no distracting sounds from the bottom of the engine compartment.

If you choose the 1.4 TDI, you can choose a very simple version with 75 HP or a slightly more advanced version with 70 or 80 HP. The first has a fixed geometry turbocharger, while the other two VGT turbo are introduced in 2005. However, neither use a double-mass flywheel, and the injection system consists of an easy-to-repair unit injector.

In order to sleep relatively well after buying a car with a small 1.4 TDI diesel engine, check the axial rotation of the shaft when changing the valve timing. If that was normal, there was nothing to be afraid of. If not, consider reselling the car or slowly find a second engine. Therefore, we recommend this engine on condition, if you find a cheap and good car.

The 5W-40 oil with the standard VW 505.01 must be changed every 15,000 km and there is no point in looking for other solutions. This is important for the efficiency of the unit injector. In addition, the timings are changed every 90,000 km, and by the way, it’s worth installing a new accessory drive.

Toyota’s small diesel engine, which made its debut at Yaris in 2001, can be considered the best diesel engine of this manufacturer, based on Common Rail injection technology. Powerless up to 90 HP but economical, reliable and cheap to repair.

Toyota did not create a simple engine because it used Bosch high pressure injection, variable geometry turbocharger and intercooler. These accessories are either cheap to repair (injection) or very durable (supercharged).

However, what can’t be done very well doesn’t show up in this engine. Of course I am talking about double mass wheels. Unfortunately, there is one thing that can cause problems DPF filters. However, it’s only been used since 2008, as is the somewhat expensive but reliable liquid-cooled EGR valve.

The engine is basically available in two power versions: 75 HP and 90 HP. There’s also an 88 HP version, but it’s only used on the Mini One D.This is the equivalent of a 90 HP engine. Weaker engines are the least complicated, but were discontinued in 2008. Buying a car with a 1.4 D-4D engine is always a good decision, even though the HDI engine really works under the hood (see first article above). However, this only applies to the Toyota Aygo.

The operation is not demanding. The manufacturer even allows the use of 15W-40 oil, although we recommend a minimum of a good quality 10W-40. Replace every 15,000 km. The time drive runs a smooth chain. However, it’s best to check valve clearance every 40,000-50,000 km. Remember to replace the auxiliary drive together with the water pump, as there are leaks and air pockets in the system.

Why choose a small diesel engine without a double mass flywheel?

For several years now, interest in used diesel cars has steadily declined for a simple reason expensive repairs. Diesel engines can deliver significant fuel savings, but sometimes repairs can wipe them all out. That’s why we’ve warned you more than once not to buy a used diesel engine, if you really don’t need it. Especially if you intend to drive a small car for short distances.

But what if you drive a lot, but don’t want to spend a fortune on the potential effects of a diesel equipment failure? Do you have no choice, and the only thing is petrol with an inconvenient gas installation that takes up a lot of space in such a small trunk? Not completely. There are many cars on the market with small, simple diesel engines that are cheap to repair.

What brings in the biggest costs?

In general, small diesel engines are very durable, outperforming gasoline engines in this respect. However, we are talking about the engine itself, not the accessories. One of the elements that will wear out sooner or later is the double-mass flywheel.

Especially if you drive in the city and change gears a lot, it is a pain, and you will spend at least $ 400 on a replacement. Therefore, it is clear that the lack of an unpopular double mass will allow considerable savings in the long run. This is one of the key elements.

The lack of double-mass wheels is a sign that we are dealing with a small, simple, low-power diesel engine design. As a result, often less complicated, supercharging systems, no variable geometry turbochargers, sometimes even without an intercooler, and simple electromagnetic injection.

That’s why a small diesel engine without a double bulk flywheel is almost automatically so cheap to use, and no improvement will surprise you financially. In our overview we present small engines without double mass wheels and with simple accessories, as well as several models of the cars on which they are installed.