Comparing the first generation of the W202 C-class to the BMW 3 Series E36 or the Audi A4 B5, Mercedes best of them stood the test of the passage of time. Remember, however, that there are many failures that effectively extinguish the glow of a shining star. 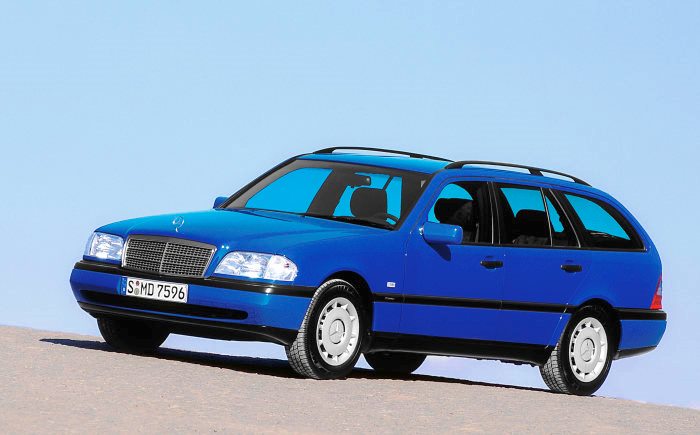 “Robust like a German Mercedes” – that was once said of expensive, high-quality products. Unfortunately, with time, this saying lost its sense, because most of the models of this brand manufactured since the mid-90s turned out to be above-average failure structures.

The last of the reliability standards of this brand was, of course, the iconic W124 model, at that time a slightly smaller representative of the middle class, marked with the symbol W202, was also produced. Is this car as reliable as the W124 or W 201?

As Mercedes fans remember well, the first representative of the middle class of the Stuttgart brand was the 190 (W201) model, which became famous for its high-quality workmanship. In addition, it was offered at a slightly better price than the more prestigious W124 or the flagship W126 limousine, which only the richest cream could afford. In 1993, the C-class (W202) made its debut on the market for the first time, initially only as a sedan.

It was only in 1996 that a station wagon version with a characteristic hump appeared at dealerships. A year later, the car was modernized, and diesel engines marked with the CDI symbol with common rail injection were introduced to the engine offer.

In addition to the aesthetic and engine changes, the list of standard equipment includes such elements as: four airbags at the front (two front and two side ones), BAS system, electronic ASR system in all engine versions except C180 and C220D. Production of the C class W202 ended in 2000, when the W203 model appeared on the market.

Which power units deserve attention? The choice of a gasoline engine will largely depend on the size of our portfolio. Gasoline engines enjoy a rather good reputation, although accessories such as a flow meter, throttle or ignition coils can always be used here. There are many models on the market with a gas installation, which drastically increases the failure rate of those units that do not cope with it very well.

Among diesels, the most durable engine is the W125 and W201, but already very old, naturally aspirated engine with a capacity of 75 HP. Unfortunately, when buying a W202 with this diesel unit, we have to get used to the very poor dynamics of the car.

People who want to drive faster should consider buying a 2.5-liter TD unit, although here, in turn, there may be problems with the Bosch injection pump. We advise against choosing the 220D variant, as the Lucas injection pump fails frequently.

The newer generation CDI engines can boast a high working culture, but repairs to the Common rail injection system will be much more expensive than repairs to other diesel engines.

The W202 equipment offer does not include the 4-wheel drive known in Mercedes as 4-Matic, there is only the traditional rear drive. The torque is transmitted via a 5-speed manual or a 4- or 5-speed automatic.

As befits the premium class in the first generation of the C class, both the front and rear have multi-link independent suspension, which ensures very high driving comfort. The models with the smallest engines weigh 1,350 kg. The Mercedes W202’s result in Euro NCAP crash tests is two stars, of course taking into account the rules that were in force in the 1990s.

The most common problems are the corrosion of the bodywork, which occurs mainly on the fenders, but also under the seals. In the models from the beginning of production, there are also play in the steering gear and premature wear of the steering rods. Users of the Mercedes W202 class must also prepare for failures of the flexible joint of the drive shaft and oil leaks from the rear axle.

Automatic gearboxes are also fail-safe, the main cause of their damage is old gear oil, which was not replaced by previous users. Interestingly, the old type 4-speed gearboxes are considered more durable than the new ones.

The most fault in this model is the defect of the electronic key, its damage prevents the car from starting, and the repair is usually not cheap. In addition, Mercedes W202 users complain about too delicate suspension, where metal-rubber elements, especially at the rear, require replacement. The fan’s viscous bearing, the engine temperature sensor or the central lock may also be damaged.

The Mercedes C-Class W202 is a luxury limousine that can be traveled comfortably provided that we invest some money in it. There is no need to count on maintenance-free operation, if we want to spend less on the service, we have to find a well-kept copy with a gasoline engine or a 2-liter diesel engine. We advise against buying cars with LPG installation, which significantly increases the failure rate of gasoline engines.

The greatest advantages of the C-class Mercedes are, of course, prestige, low value loss and high availability of cheap spare parts. The disadvantages are the low quality of the materials inside – especially in cars from before the facelift and corrosion of the body. We will buy the cheapest W202 for about $ 1,327.