The Mercedes M111 engine is an in-line four with a volume of 1.8 to 2.3 liters. This engine appeared in 1992 and was produced until 2006.Thus, their debut took place at the Mercedes W124. The newest Mercedes with this engine is the C class W203, the SLK R170 roadster, the CLK C208 coupe. But the engine lasts the longest on the Sprinter W905. In addition, this 2.3 liter power unit was installed on a Volkswagen LT and two SsangYong – Musso and Kuron. 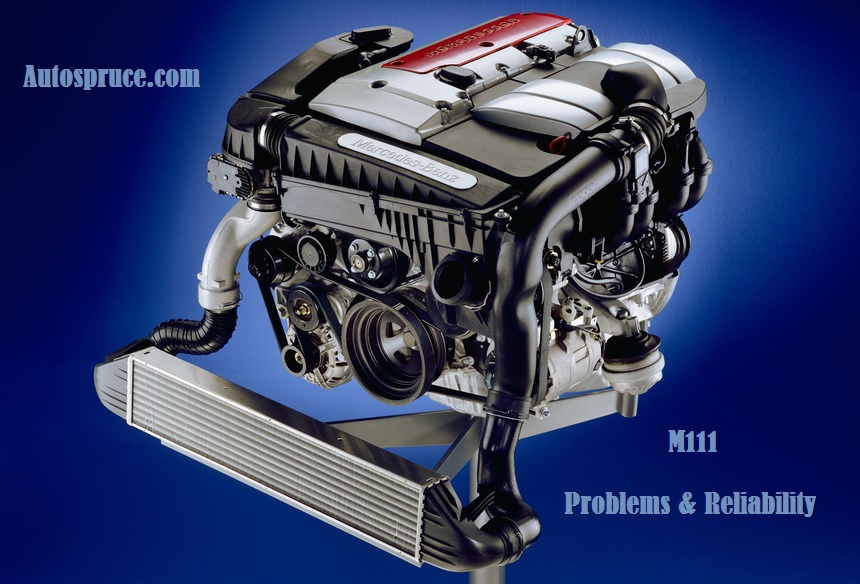 The M111 engine has a cast iron cylinder block and a 16 valve aluminum cylinder head. Of course, there is a hydraulic lift in the valve drive. At the intake camshaft there is a phase drive from the original design.

For detail about common problems and reliability, please check the review below:

From the start, the engines of the M111 family received electronic fuel injection with a fairly advanced PMS control system, which controls the injectors and candles. The PMS (Pressure Monitoring System) system is manufactured by Bosch and Siemens, and the point is that it measures the load on the engine with an absolute pressure sensor. And this sensor is one part with the control unit.

The pressure sensor turned out to be fragile and short-lived, and if it failed, the whole unit had to be replaced. Later, these blocks learned to re-solder with a failed replacement of the pressure sensor. An engine with a PMS system has never been installed in the Mercedes W210. They used the initial 1.8 and 2.0 liter M111 engines for the W124, W202 and W638 models.

At the turn of the 2000s, the M111 engine evolved: the beam was reinforced, the piston and connecting rods were reinforced to increase the compression ratio. The cylinder head was also changed, individual ignition coils appeared. While the compressor version was originally equipped with the Eaton M62 supercharger, which was driven by a separate belt via an electromagnetic clutch, the EVO version received an Eaton M45 supercharger with permanent supercharger drive.

We will dismantle the 2 liter naturally aspirated M111,942 engine taken from the 1994 W210 E-Class 136 hp engine. This machine is equipped with the Bosch HFM control system with film flow meter.

This is an Eaton M45 compressor with a 2.3 liter M111 engine. Such a compressor continues to rotate while the engine is running, creating an excess pressure of up to 0.37 bar.

From the manufacturer’s point of view, the compressor cannot be repaired. However, auger needle bearing kits are available for that. The bearings are the same for the M45 and M62 compressors.

Compressor wear is indicated by howling and even buzzing during operation, as well as the presence of aluminum dust in it, scratches on the auger.

Early versions of the M111 engine for the E-class W210 up to 1997 were equipped with an engine management system with a new model film flow meter, which more accurately calculates the intake air quantity.

This control system is more reliable than its predecessor (on the M111 engine), but can fail due to a short circuit in the engine harness wiring or damage to the ignition coil. Fortunately, HFM is repairable and can be repaired by a knowledgeable electrician.

The complete set of HFM film flowmeter is the hot film air mass flowmeter. Mass air flow sensors of this type are still in use, but are capable of supplying a digital signal to the ECU.

The bulk airflow sensor of the M111 engine generates an analog signal. The performance of this sensor can be checked with a voltmeter: the voltage across it should be in the range of 0.9-1 Volt. Nothing more, indicating a faulty sensor reading. The engine reacts to erroneous data from the bulk airflow sensor with poor starting, uncertain idle.

Malfunctions in the operation of the film mass air flow sensor arise due to oil and soot deposits on sensitive elements.

Often times, the crankcase ventilation system requires attention, as it violates its patency. Usually, a blockage occurs in the restrictor (entering the bottom of the intake manifold) and in the tube leaving the oil separator.

To check the patency of the VKG system it is easiest to remove the tube connecting the inlet to the damper and valve cover. The hole in the valve cover needs to be closed with something (at least with your palm, at least with a card) and check for air to enter.

With the engine running, air should be properly sucked into the valve cover, even with a slight increase in speed. If gas pressure is pressed from the valve cover, the permeability of the VKG system is compromised. Or there is too much crankcase gas in the engine due to CPG wear.

If there is any doubt about the viability of the VKG system, you should look for the breath and tube in front of it. True, they are located under the intake manifold and difficult to access. In any case, they need to be checked if the engine starts squeezing oil through the oil seal.

The well-known “pain” of the M111 engine is a crankshaft position sensor fault. The sensor is damaged by heat. With high heating, it doesn’t give a signal, which is why the engine shuts down and doesn’t start until it cools down.

It is surprising that the engine management system on the M111 motor and the larger V-shaped motor does not log the error from the crankshaft sensor. You can restart the engine by flushing the sensor with water. This allows the exact cause of the damage to be determined.

Throttle Valves There are two types of throttle valves in 111 motors. In cars without cruise control and traction control, they can only stay still. With cruise and ASR (traction control), the damper is controlled by a separate unit and has more autonomy.

That can cover the damper or open it completely. These flaps can be distinguished from one another by their connectors: 8 pins for the “simple” flap and 14 for the cruise control and ASR flaps.

Since old age, electronics from such dampers breakdown. The damper motor may malfunction or malfunction. Also, the damper can begin to break due to a violation of its cable insulation – the part of the cable that is inside the casing. But there is practically no problem with the potentiometer of the damper position sensor.

In the case of electrical problems with the throttle, errors are noted and there are noticeable problems with the adjustment of the idle speed and the odd response of the accelerator. In addition, due to a damaged throttle, the engine can stop when side loads appear: turn on the AC compressor, turn the steering wheel.

When the M111 engine throttle valve is dirty, the symptoms are less obvious. For example, the engine does not start for the first time, and this symptom may appear only in a cold or hot engine.

Also add that the throttle problems of a 1990s Mercedes and many other electronically controlled components can be caused by a so-called “overload relay” failure. Solder is simply crushed in it. Knowledgeable people proactively solder these relay contacts to avoid problems with anything: from the gas station to the throttle.

Let’s go back to the crankcase ventilation system. Fresh air is sucked into the crankcase through the upper pipe, the entrance of which is located in the inlet after the mass air flow sensor and in front of the throttle, at low engine speed. And at high engine speed, the spray gas is sucked through this tube, and the unfiltered part of the oil vapor.

So, the oil vapor has access to the throttle and can coat it, forming the famous plaque.

Additionally, oil vapors can bounce off sharply closed throttle valves, and even gain access to the flow meter.

We also add that in cold weather, with insufficient engine heating, humidity and even emulsion also circulates through the upper tube of the VKG system. They can cause the choke to freeze and form a thicker layer of beige. It is an oil change color mixed with moisture.

In fact, the build-up of abundant moisture and condensation at the top of the cylinder occurs because the engine doesn’t have time to warm up in cold weather and evaporates all the moisture entering the crankcase with fresh air.

Over the years, the original phase change mechanism has been used in a wide variety of Mercedes petrol engines. On the M111 engine, the phase shifting clutch is located on the inlet camshaft. The clutch is controlled by a solenoid connected to a hydraulic valve (solenoid).

These are popularly called “magnets”. It stands at the end of the camshaft, the solenoid (or “magnet”), at the command of the solenoid, moves the spool, thereby paving the way for the oil that drives the phase regulator.

Over the years and with the distance traveled, a coil driven by a magnetic field can easily get stuck in its line. This usually happens during cold starts. The motor will start vibrating, an error will start indicating the clutch. In many cases removing the “magnet” and moving the spool located on the camshaft helps.

Also, at high mileage, the connector on the “magnet” can leak oil, which is well removed by dismantling the magnetic casing and sealing it. If the phase-shifting clutch falls during operation, the cause lies in a decrease in magnetic power. It must be replaced.

The clutch itself may need to be replaced if, with the movable spool and working ECU, there is a problem with phase control.

Because the injector is clogged, the engine works unevenly at idle, loses power, feels like a failure during acceleration. It is known that the Italian Siemens Deka Z1 injector of the Volga and the 2.5-liter Gazelle engine works well for the M111 engine.

The M111 engine has two dual ignition coils. These coils are sensitive to spark plug wear. Therefore, in case of a breakdown with ignition, it is necessary to evaluate the condition of the candles and coils in a complex. The old plug can quickly damage the new coil.

Ignition failure is indicated by a drop during acceleration, tripping and strong spinning, similar to the attempt of an engine not to stop if one cylinder is turned off.

The chain runs more than 300,000 km. When it is stretched, its spin is floating, the light clink of the chain is heard. Engineers have provided the ability to accurately control the stretching of the chain. To do this, alternately repair the intake and exhaust camshafts and check the crankshaft displacement.

Usually, the leak appears on the right front, near the generator. To get rid of leaks, you need to remove the “head”, replace the gasket. It is highly recommended to check the cylinder head plane, and also replace the valve stem seal.

The M111 engines last hundreds of thousands of kilometers, so it can be said that their cylinder-piston group is strong. Blocks can be honed, manufacturers offer repair sizes for piston rings, pistons and all liners.