Automobili Ferruccio Lamborghini was founded in 1963. Ferruccio Lamborghini had made his fortune in the years after World War II with (much) more the production of tractors. In the early 1960s, he decided to build a car that he wanted to compete with Ferrari, allegedly following an argument with Enzo himself about the quality of his cars. In the shortest possible time, Lamborghini created the 350 GT with the help of big names from the Italian car world.

In 1966 Lamborghini presented the Miura. With a midship V12 engine, this was the fastest car in the world at the time. With a top speed of 280 km / h and folding headlamps with eyelashes, the Miura became the icon of the brand. Just like the Countach from 1973, the most extremely designed car in a long time, with the flat windshield that was almost in line with the nose and the hood that flowed into the hood. The V12 was again amidships.

Despite being smaller than Ferrari, Lamborghini was successful. In 1972 Lamborghini sold its interests in the car brand and as early as 1980 it was bankrupt. The Mimran brothers saved the brand and had innovative ideas about the introduction of a super-fast all-terrain vehicle. Never seen before! In 1987 the LM appeared on the market, with a V12 engine in the front that was closely related to that of the Countach. Chrysler took over Lamborghini in 1987. In early 1994, the Lamborghini suddenly sold to a group of Indonesian investors, and Audi has owned Lamborghini since 1998. 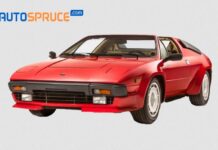