The 1.4-liter diesel engine Hyundai D4FC or 1.4 CRDi was produced from 2010 to 2018 at a plant in Slovak Zilina and installed on models such as i20 , i30 , Rio, Ceed and Venga. There were two generations of such an engine: for Euro 5 economy standards and updated for Euro 6.

Using the example of a 2015 Hyundai i20 with a manual transmission:

Which Cars Were Equipped With The Hyundai-kia 1.4 CRDi D4FC engine?

The Most Common Problems Of The 1.4 CRDi D4FC engine

The Hyundai U series also includes internal combustion engines with indices: D3FA , D4FA , D4FB , D4FD and D4FE . At the very beginning of 2010, a 1.4-liter diesel of the U2 line debuted on the Kia Venga model.

The engine was offered in two versions of 75 and 90 hp, but with the same torque of 220 Nm. Structurally, this is a modern diesel engine for Euro 5 economy standards with a cast-iron block and an aluminum 16-valve DOHC head with hydraulic compensators, a timing chain drive, a conventional MHI TD025S2 turbine and a 1800 bar Common Rail fuel system from Bosch.

In 2014, an updated version of this engine appeared under more stringent Euro 6 economy standards, which featured a reduced compression ratio from 17 to 16 and a torque increased to 240 Nm. 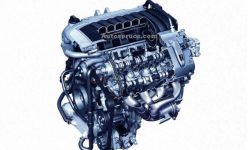