The 5.4-liter Triton, or 330-cc, V-8 engine of the Ford Motor Company debuted in 1997 with two valves per cylinder for a line of trucks. The automaker launched a second version for its four-valve-per-cylinder truck line in 1999. A third version of the 5.4-liter V-8 with three valves per cylinder arrived in 2002, first for passenger cars and then for trucks, vehicles and the Lincoln Navigator. These engines were the first V-8 Ford with a 5.4 liter displacement. 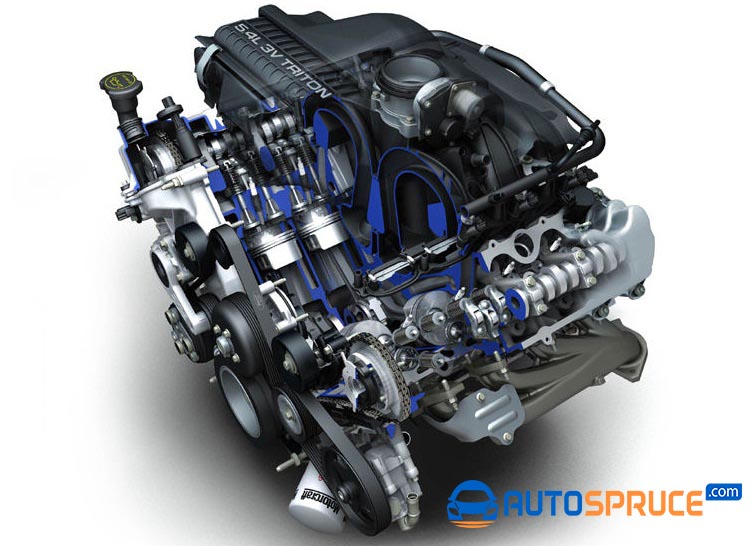 The original 5.4-liter V-8 earned a spot on Ward’s Auto World’s “Top 10” engines. Approximately 1.3 million modular V-8 engines were built in 2001 alone. The basic architecture of these three versions remains the same, with the number of valves and other capacity components varying according to the needs of each model. Ford replaced the 5.4 V-8 in 2010 with a 6.2-liter V-8 with 411 horsepower.

The 5.4-liter V-8 belongs to Ford’s modular engine family, which also includes a 4.6-liter V-8 and a 6.8-liter V-10. The first modular engine used a single overhead cam. “Modular” derives from the modular tooling system in the Ford factories, allowing quick adaptation to different types of production and thanks to the interchangeability of the components of the three engines.

Ford installed its first 16-valve 5.4L V-8 in a 1997 Ford F-150 pickup and sold it as the Triton V-8. It had a 3.55 “bore and 4.16” travel. The longer stroke increased the engine deck height over the 4.6-liter variant. It had a cast iron block, aluminum heads, and a multiport electronic fuel injection system.

The valve lifters were hydraulic eyelash setters with a roller pusher. Other features included a forged steel crankshaft and fractured powder metal connecting rods. The 9: 1 compression ratio helped it develop 255 horsepower and 350 lb-ft of torque. Some versions developed up to 260 horsepower, while the performance Ford SVT Lightning F-150 came supercharged and rated 380 horsepower.

In 2002, Ford introduced a 24-valve version for power sedans, but two years later offered it for the F-Series trucks. It featured variable camshaft timing and more power and torque than dual-valve models. The 5.4L 24-valve provided lower friction than the two-valve versions and a single overhead cam with roller tappet.

The cylinder heads were of aluminum alloy. It delivered 300 horsepower and 365 lb-ft of torque thanks in part to a 9.8-to-1 compression ratio. Power was eventually bumped up to 320 horsepower.

Ford sold a 32-valve 5.4-liter InTech V-8 engine. This was a new version of the original 5.4 double overhead cam. Ford has approved InTech in its trucks, work cars, Lincoln navigator and Ford Falcon in Australia. But the 32-valve 5.4L powering the SVT Cobra cars was significantly different from the truck versions.

Ford uses the 5.4 liter V8 Triton engine as a powerful utility engine for the F-150 series trucks, as well as high-performance sports cars such as the Shelby GT500. Ford’s entry-level 5.4 liter SOHC V8 modular engine develops 260 horsepower at 4,500 rpm and has a capacity of 5,408 cc.

It produces 350 feet of torque, has a compression ratio of 9: 1, bore 3.55 “, and travel is 4.16”. The engine is equipped with Variable Valve Timing (VMT), which increases engine efficiency when the inlet and outlet valves are actuated, and also has a load motion control valve (CMCV) which increases the combustion efficiency of the engine at low rpm.

Used in high-performance vehicles such as the SVT Lightning, a modified version of the Triton 5.4-liter V8 gets 380 horsepower at 4,750 rpm, producing 450 ft-lbs. of torque at 3250 rpm and the red line at 5,250 rpm. The engine is equipped with advanced electronic engine controls, aluminum heads and a durable cast iron block.

Ford has used the 5.4-liter V8 in several of its vehicles, including the Expedition and Excursion sports cars. The engine also supports the Ford Mustang Cobra version of the Ford Special Vehicle (SVT) team and the Ford GT supercar.

Introduced in 1997 for Ford Motor’s F-series pickup trucks, the 5.4-liter V-8, called the Triton, is part of the American automaker’s “modular” engine family. The 5.4-liter V-8 also appears in other Ford vehicles such as the Expedition full-size SUV and its sibling, the Lincoln Navigator.

The 5.4-liter Triton spark plugs can be the most expensive to repair, with prices under $ 1,300. The fuel pump drive module is much cheaper to repair at around $ 127. IACV is priced at $ 116; and the gauges are split around $ 183 for MAF, $ 64 for DPFE, and $ 59 for camshaft position. While ignition parts for the F-Series and Expedition can cost nearly $ 79 to repair, the Navigator costs nearly $ 30 more for the repair.