Enzo Ferrari (1898) headed Alfa Romeo’s racing department in the late 1920s and later started his own team, Scuderia Ferrari, also with Alfa Romeo. In 1937 he said goodbye to Alfa Romeo and in 1947 he started his own (racing) car brand. In 1950 Ferrari took part in the newly established Formula 1 World Championship; the brand has been the only team to participate in all seasons held so far.

The Ferrari logo, the prancing horse or cavallino rampante, is inspired by a piece of jewelry Ferrari received from fighter pilot Francesco Baracca. He died during the First World War. In memory of Baracca, Ferrari used the horse as the logo for its race car. For the first time on an Alfa Romeo, because Ferrari was still associated with Alfa Romeo at the time. It wasn’t until 1947 that the logo appeared on a real Ferrari.

Ferrari didn’t care much about history. About his cars, he always said his latest was the best and reportedly said he made and sold road cars to finance his racing activities. In 1969, he sold half of his business to Fiat on the condition that he would retain full control of his business. In 1987, the Ferrari F40, at the time the ultimate super sports car, appeared in honor of the brand’s 40th anniversary. It was the last car to be developed under the leadership of Ferrari, because Enzo Ferrari died in 1988. Since 2016, Ferrari has been independent again. 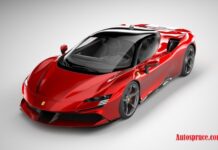 Ferrari Jasmine Lee
0
It was only a matter of time before the open version of the Ferrari SF90 Stradale arrived, and that time has come. Theoretically, Spider...