The F16D3 Chevrolet engine, which began serial production in 2004, was developed as a replacement for the F14D3 engine (2001 – 2008). The analogue for these power units was the well-known power unit of the Ecotec family – Z16XE, created by the laboratory of Lotus Cars (Great Britain). It was installed on various Opel cars (Vectra, Astra, Meriva, Zafira) from 1995 to 2006. 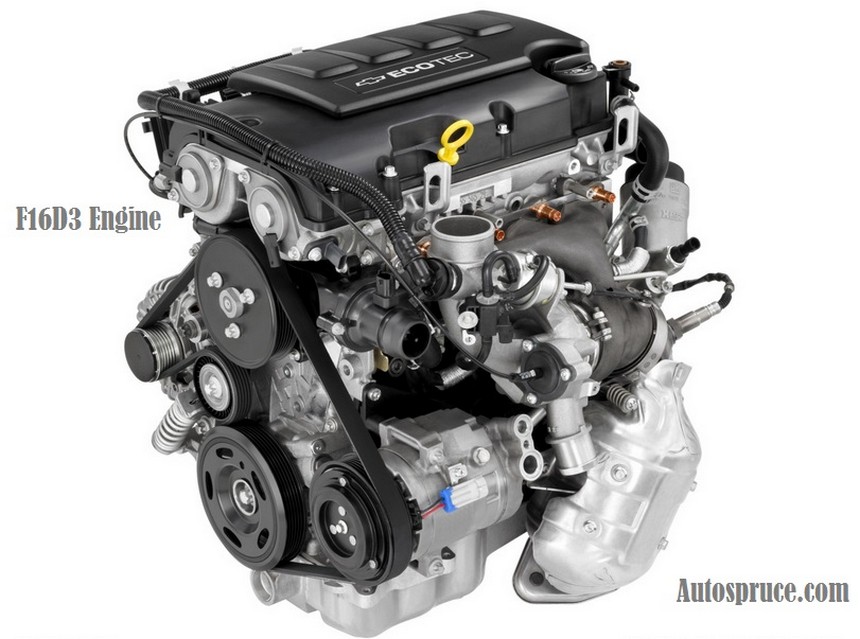 In 2007, the F16D3 engine was discontinued, but its story did not end there. Chevrolet, which is an economically independent division of the American concern General Motors, released new engines in 2008 – F16D4 and F18D4, the production of which continues to this day. In practice, these power units are an upgraded F16D3 engine.

All three power units of this series (F18D4, etc.) are of the same type and represent a four-cylinder four-stroke internal combustion engine with an in-line arrangement of cylinders.

Its cylinder block is cast from ductile iron and the cylinders are bored directly into its body. The cylinder head is made of aluminum alloy and provides lateral airflow to the cylinders.

The difference between the power units of the Ecotec D family, namely, they are the prototype of the engines under consideration, is the presence of 4 spark plug valves located in the center of each cylinder. That is why they use a 16-valve timing mechanism (DOHC 16V) with two overhead camshafts, which is driven by a toothed belt.

The Engine are equipped with electronic control systems:

The engines also have the same lubrication and cooling systems. Forced cooling is carried out in a closed loop.

The combined lubrication system is organized in such a way that engine oil is supplied to the friction couples by spray or under pressure (through oil channels made in the walls of the cylinder block and its head).

A distinctive feature of the power units is also a high degree of unification at the level of parts, a large number of which are interchangeable not only within the family, but also with the Opel Z16XE and Z16XER engines.

At the same time, there are significant differences in the design of the engines, which predetermines a number of individual technical characteristics of each of them.

Features of the base F16D3 engine

The F14D3 engine was distinguished by its simplicity and reliability in operation. However, he had a number of disadvantages that negatively affect the stability of work, for example: the use of the CVCP (Continuonus Variable Camshaft phasing) system in the gas distribution mechanism; application of an electronic exhaust gas recirculation (EGR) system; use of hydraulic valve lifters.

Due to these shortcomings, the F16D3 engines were characterized by:

Differences in the design of the F16D4 power unit

When creating the F16D4 engine, the developers managed to get rid of the shortcomings characteristic of the base F16D3.

So the F16D4 engine was equipped with a new variable valve timing system VVT (Variable Valve Timing); He also got a system for changing the length of the channels of the intake pipe and got rid of the exhaust gas recirculation (EGR) system. In addition, the valve lifters were replaced with calibrated cups.

As a result of the modernization, a more powerful and reliable engine was obtained.

The F18D4 engine differs from the F16D4 engine in its increased volume of cylinders and, as a result, in greater power and thrust. In its manufacture, the same design solutions were used as in the F16D4 engine.

In addition, it was possible to double the resource of the timing belt drive. Valve parts are made of chrome-silicon (intake valve and exhaust stem) and chrome-manganese-nickel (exhaust valve head) alloys.

Operation of engines of Chevrolet Aveo (F16D3), Chevrolet Cruze (F16D4 and F18D4) and other vehicles is carried out according to the manufacturer’s requirements for regular maintenance. The Chevrolet Lacetti oil change is carried out every 15 thousand km.

For engines installed on the Chevrolet Cruze (F18D4), replacement:

In the engines of Chevrolet Aveo, Daewoo Lanos and other cars, replacements:

In the Chevrolet Cruze engine (F18D4, etc.), during routine maintenance, they change:

The American concern General Motors, along with engine and cars, is engaged in the production of auto chemical products. The concern manufactures these products in strict accordance with the requirements that apply to Chevrolet Cruze engines and their analogues.

That is why the technical documentation contains recommendations for using the original:

GM Dexos 2 Long Life 5W-30 engine oil is an original product, the chemical composition of which includes special additives that extend its service life and significantly increase the time between replacements.

This synthetic oil is intended for use in engines such as Chevrolet Cruze, Opel Mokka, etc.

The original GM Long Life Dex Cool antifreeze superconcentrate has a unique chemical composition and excellent anti-corrosion properties. The anti-corrosive agent together with antifreeze increases the boiling point and also prevents the coolant from freezing when exposed to low temperatures.

Also, the composition of the antifreeze includes emitting inhibitors that provide an extended period of use (up to 250 thousand km or 5 years of operation).

Antifreeze of this class is intended for use in engines of Chevrolet Aveo, Daewoo Nexia, etc.

The engine of the Chevrolet Lacetti and other cars (F16D3) is equipped with hydraulic valve lifters, therefore, regular valve clearances are not required.

The Chevrolet Cruze engine uses tared cups instead of hydraulic lifters, with which the valve clearances are adjusted. This procedure is carried out during maintenance at the workshop after every 100,000 km of run.

When using high-quality gasoline, regular maintenance, warming up the engine and gentle operation, the F16D3 engine, as well as the F16D4 and F18D4, travels from 200,000 to 250,000 km without problems. However, this engine are not free from disadvantages.

In addition, the base engine F16D3 has a number of disadvantages that later power units of this series (F18D4) have been relieved of:

Typical malfunctions typical for all power units of this series are eliminated as follows:

Many tuning studios offer to use sports firmware to improve the technical characteristics of car engines. However, in this case, the Chevrolet Lacetti engine, as well as other power units of the Ecotec series, will receive smooth traction and a slight increase in output power.

A solid increase in power can only be obtained through a rather complex and expensive modification of the engines.

To obtain a power of more than 140 liters. from. it is necessary:

These improvements, along with the sporty firmware, will allow for a decent increase in power.

Similar results can be obtained if the RK-23-1 compressor is installed on the engine, which provides a boost of 0.5-0.6 bar. In addition, you will have to replace the cylinder head gasket and install 360 cc injectors and sports camshafts. Careful tuning of the power unit will allow you to get a power of about 150 liters.

You can raise the engine power to 180 horsepower if you carry out a set of work on the installation and adjustment of the TD04L turbine.

In addition to the turbine, it is necessary to purchase and install: