The Demon is built on the Challenger SRT Hellcat model, which is already very powerful in itself. Its V8 engine produces 707 hp. The 6.2-liter HEMI has undergone strengthening treatment, making it the strongest mass production V8 power unit. 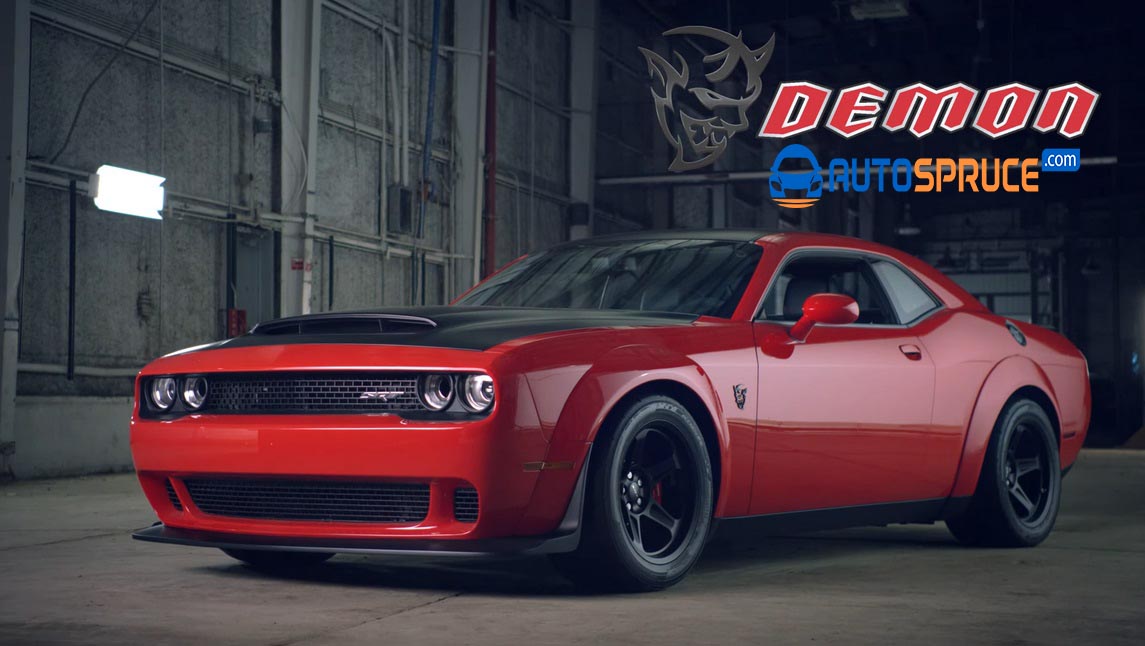 Develops 840 HP and 1044 Nm of torque! As if that weren’t enough, the engine meets American emission standards and is paired with an 8-speed automatic transmission for added comfort.

We want to remind you that it’s all on behalf of the FCA, namely Fiat Chrysler Automobiles. The Dodge brand is part of this group, and its boss, Tim Kuniskis, confirmed that they want to make cars for auto enthusiasts, brands and fast driving. At the same time, the best muscle car ever made.

The beast just launched at the New York Auto Show, and already boasts a Guinness World Record. The acceleration is very powerful and not everyone is able to withstand it. There is no such car yet!

It is equipped with Nitto NT05R tires, which, although legal on the road, are actually racing tires specially prepared for this model. All four measure 315/40 R18. The special design not only provides double the grip of the Challenger Hellcat, but also the tires to the rims to prevent them from turning on the rims. During fast start the tire contact area increases due to the specially adjusted suspension geometry. This causes the driver to squeeze into the seat 1.8 g of style.

Not only are the special tires fighting for the monster’s grip, but also the Bilstein Adaptive Damping shock absorbers, which work in such a way that they are able to shift to the rear axle by 11 percent during takeoff. more dynamic vehicle weight.

When the driver activates Drag Mode, the shock absorber changes its characteristics as follows the front becomes tougher in terms of compression, and soft in terms of stretching, while the rear is the other way around, that is, squats gently. This is definitely not a corner racing car as it also has soft suspension springs and stabilizers.

The car is very stable on the straight road. The ESP system has been calibrated to help riders keep a straight line during the race, but traction control can be released to warm the tires. A special gearbox program allows the driver to increase the engine speed before takeoff without starting.

This car is 90 kg lighter than Hellcat after many elements thrown from the interior, including. rear seat and passenger seats, soundproof mats, armrests, a complete audio system, floor mats, vibration dampers, underbody guards, and parking sensors.

The funny thing is, some of these items can be ordered for an extra fee. However, it’s fair enough that the passenger seat and sofa in the back cost a symbolic dollar. The driver’s seat is replaced with lighter ones, brakes (there are smaller discs), rims and nuts.

The performance is great. Accelerating to a speed of 60 mph, or 96.56 km / h, only takes 2.3 seconds, and the first quarter mile from rest, the Demon rode in 9.65 seconds, crossing the finish line at 225 km / h. This makes the Challenger SRT Demon the fastest production car in the world. These results were confirmed by the American organization NHRA (National Hot Rod Association), which handles the quarter mile race.

From highway to track without much problem. The Dodge Challenger SRT Demon is also an ordinary everyday car, or rather a slow city tour in search of potential victims for the quarter race. However, when a driver decides to participate in a legal competition, he can refuel with 100-octane racing fuel without any modification. Just switch the engine to the appropriate mode by means of the buttons on the dashboard.

Dodge also offers a compact front wheel with narrow tires that reduces drag when racing straight. In the trunk there is room for a big jack, a set of wrenches and of course a pair of the above wheels. Drivers can make changes themselves in just a few minutes, almost anywhere.

Now this is America. Manufacturers fulfill the dreams and dreams of people who love strong and fast cars, those that arouse the most emotions. Despite strict safety and emissions standards, the true passion for driving remains in the US. We have the most hybrids, and real demons across the ocean.

But it doesn’t stop there. The Demon is already listed in the Guinness Book of Records as the production car that can make the longest wheelies. It’s about lifting the front and riding the rear wheel when starting from a stationary position. Thus, the Challenger Demon covered 0.89 meters. It’s not much, but no road car can lift the front axle at all. How could this happen to an American monster?