For years, Cupra was the type designation for SEAT’s sporty models, but that changed in 2018. Given the increasing demand for the Cupra models, the label is now positioned as a brand in itself. It stays with sporty SEATs, so in fact not much more changes than the logo (and the brand positioning). It does seem that Cupra will also come with its own models, which will not be sold as SEAT.

The first model to fall under the Cupra brand name is the Cupra Ateca presented in 2018. That is a 300 hp sports version of the SEAT version. The brand has big plans. By 2020, the number of models presented should already be seven. This is not only about sports versions of SEAT models. Cupra will also market its own sports models that are not also sold as SEAT. The first of these is the Formentor.

Because Cupra is still a relatively small brand, there is a good chance that SEAT versions of the Formentor will also appear. Even if only to reduce development costs. 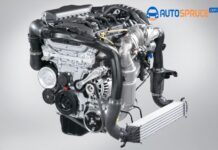