AutoSpruce.com
Home Tips Cooling System Failures And Problems – How To Fix it?

The liquid cooling system, as you already know, is relatively simple, so typical faults are simple. These are usually mechanical failures, but not always. Last week, we presented the construction and operation of a typical liquid engine cooling system. Today you will learn about common cooling failures and how to deal with them. 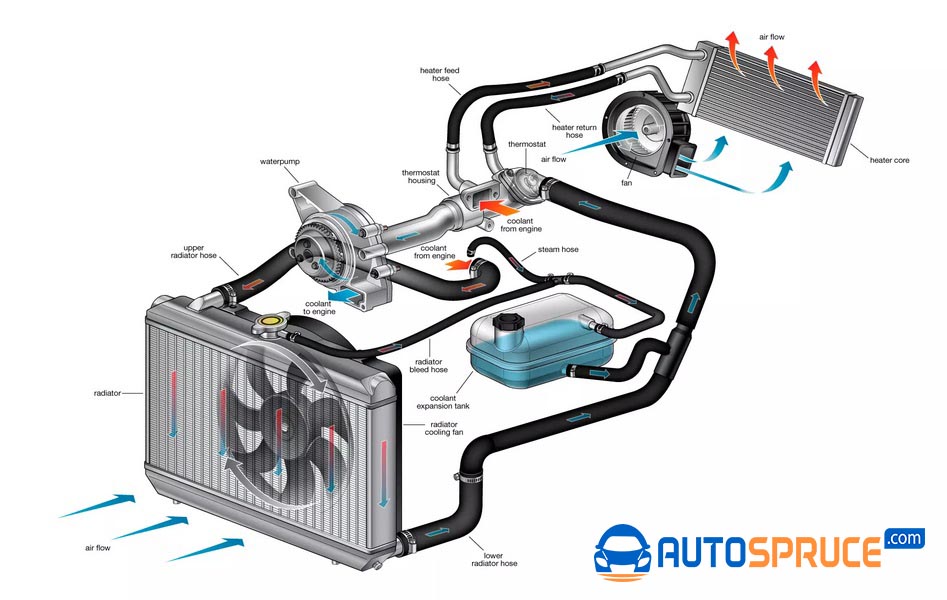 The main instrument that informs the user about the condition of the cooling system is the engine temperature gauge. It is very rare that this instrument fails. However, not all cars are equipped with it. In each, however, there is at least a light informing about too high coolant temperature. Its inflammation does not mean anything terrible yet, but you have to be careful.

It is better to act immediately

Turn on the heating if it is not possible to stop the car immediately, and if there is, stop the vehicle. By turning on the ignition, you can also use the heating, which allows you to quickly suck the excess heat from under the hood. However, be careful when opening it. If the engine coolant has boiled, the hood may be very hot.

Now let’s move on to the failure of the cooling system. The most common cause of problems are failures in auxiliary equipment, which include a thermostat, thermo-switch, fan or water pump. It’s worth starting with the simplest things. Suppose the engine is warming up. Reason? We are looking in turn.

First, check the condition of the coolant. If we know that before the problems arose, its condition was correct and there is not enough fluid, it is easy to guess that there is a leak in the system. Provided, of course, that it is not a minimal drop in fluid level. The total lack of fluid in the expansion tank and / or a liter refill should be worrying. Searching for leaks can be quite problematic and is best done with a jack.

The coolers are most often unsealed, which unfortunately are of deteriorating quality. Of course, the way to fix the leak is to eliminate it. Worse if there is no leakage. Then it is worth looking for a heater in the vicinity, which can cause a leak and at the same time the liquid evaporates quickly. If there are stains in her area, we have the culprit.

It is even worse if there is no leakage at all. Then the failure of the head gasket can be expected. The coolant seeps into the engine interior and often into the oil. This can only be checked by looking at the engine oil. If it is light or even brown, we can be concerned. It is also worth checking whether there is milk-coffee sediment under the plug.

The excess fluid in the expansion tank may also cause concern. If the fluid starts to pour out of it or a large amount of it is outside of it, then you can almost be sure of damage to the cylinder head gasket. There may be times when such a situation, on a smaller scale, will take place for a while and will disappear.

Then the cause is air in the system. Therefore, before making a decision to replace the head gasket, it is absolutely necessary to rule out other causes of problems, first of all, to bleed the entire system.

What if there is coolant and the engine is warm?

Then the search begins. The simplest reason for this is a dirty radiator. A heat exchanger clogged with flies, leaves or mud will not be able to fulfill its function, even if the fan is running at full power. Another reason may be that the fan is not working. The fan may not work for a number of reasons.

If it is electrically driven, the motor may be burnt (replacement of brushes is usually enough) or the thermo switch is not working. Connecting the fan without the thermo-switch will give a clue where to look further. In turn, fans driven by a V-belt most often fail in the area of ​​the clutch that drives them. Often the repair consists in replacing the entire fan.

The last point that rarely breaks down, especially on cars equipped with a belt driven timing, is the water pump.

Why did I mention the timing?

Because any mechanic who changes the timing will always replace the pump as well. It is not true that a good mechanic can judge the condition of a pump by examining it. This is normal reading on tea leaves. However, each pump can withstand the mileage between timing changes. This does not mean that they never break. Broken pump impellers or simple seizure occur, but rarely.

It also happens that the system is aired due to an oversight. If air is blocking the flow of coolant to the radiator, the system will almost certainly warm up. In such a situation, the system should be deaerated, although in many cars the systems deaerate themselves provided that the liquid level is frequently checked. If there is air in the system, it is not uncommon for the radiator to be cold, as in the event of a thermostat failure.

Another problem of The Cooling System

This is especially the case in cars with large system capacity, often with diesel engines. Then, almost 100 percent of the culprit is the thermostat, which is stuck in the open position. It is worth knowing that very efficient cooling systems are designed in such a way that the thermostat constantly works in both directions, and often only slightly opens.

In such cars, the fan usually turns on only when using the air conditioning. Another reason may be a disturbed operation of the fan switching system, which, while working continuously, excessively cools the liquid.

Ways to fix the Problems

If components such as the water pump, thermostat or thermo switch fail, there is no other way to fix the problem than by replacing these parts. If the thermostat is stuck in the closed position, and we do not have access to the parts, then for a while, especially in the spring and summer, you can simply remove it and drive the car for a while with a high circulation without any worries.

The failure of the thermo switch also does not cause any major problems. You can short-circuit the contacts of the fan switching cables. However, you have to take into account that a long-running fan will wear out faster. There is practically no way to replace the water pump other than to replace it.

The leakage largely depends on the size of the fluid loss. A large leak is associated with immediate repair, a small one with frequent refills or saving yourself with radiator additives that plug small holes for a while. Cooler contamination can only be properly removed by removing it and washing it with a hand wash. You have to be careful not to damage the plates that help to dissipate heat.

Fan failure is often associated with its replacement. If the fan in a given model is particularly emergency, it is worth trying to replace it with a different one, designed for a different model or a replacement for companies producing fans. Often times, the repair can not only be cheaper, but also more effective.

When adjusting the fan, take into account its efficiency and the way it works (pushing). Every electrician should handle the conversion. It is much more difficult to fit a radiator from another car, because it involves more serious interference in the design of the cooling system.