Bugatti was founded in 1909 in Molsheim, Germany, by the Italian Ettore Bugatti. In 1911 he designed the miniscule Bb Peugeot and in 1924 the legendary 35 appeared, which was very successful in racing and of which several successful derivations appeared. After Bugatti’s death, the factory was taken over by Hispano-Suiza for the manufacture of aircraft engine parts. Bugatti made only a few cars in the 1950s. In 1968 Bugatti was taken over by the French state-owned company Snecma and it only built aircraft engines.

In 1998 the trademark rights came into the possession of the Volkswagen Group. In 2005, after years of problems, Bugatti launched the Veyron, with a top speed of over 400 km / h and a power of 1,001 hp. 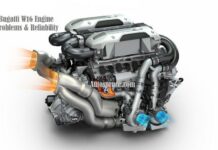 Bugatti Jasmine Lee
0
In general, the W16 series engine consists of two piston groups from VR-shaped 8-cylinder engines, which are located at an angle of 72 degrees...