The BMW Z1 is included in the roadster category which means it has a folding roof, two seats and rear wheel drive. 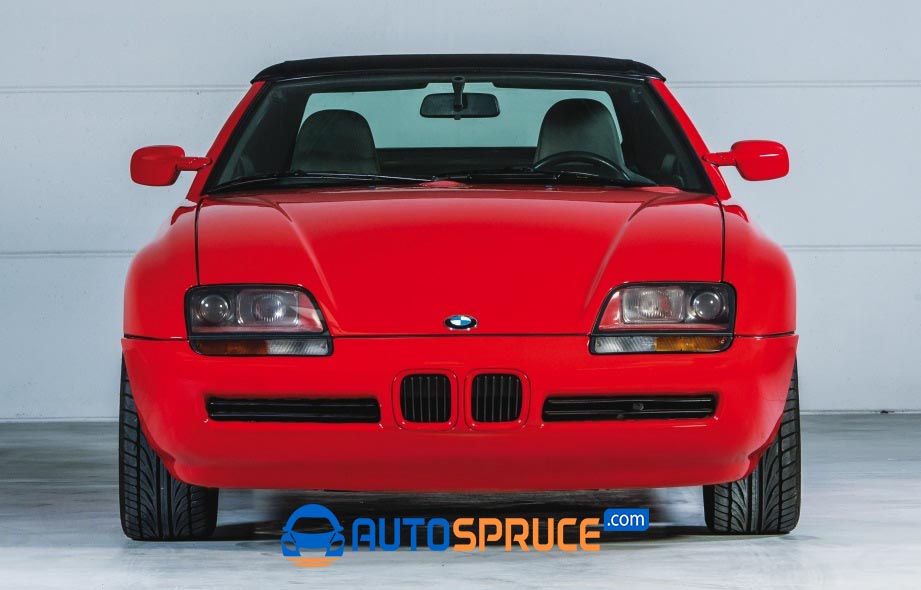 The naming of the BMW Z1 model is very simple. The “Z” in the extension is supposed to mean the German word “Zukunft”, meaning “future”, which most clearly proves how high the expectations attached to this car are. Its name also includes number 1, because the Z1 is the first BMW model in the Z series.

Sales for a moment were also the BMW Z1 RLE (Roadster Limited Edition) which had a more spacious and more powerful engine than the standard version of the Z1 (additional capacity of 200 ml and 30 HP). At the customer’s special request, BMW changed the Z1 to the Z1 RLE.

Even the BMW Z1 has appeared on the big screen, to be precise in the film “God’s Armor 2: Operation Condor”, where he played, among others, Jackie Chan.

Production of the BMW Z1 was unlucky from the start, as its original start was scheduled for June 1988, but due to delays that began nearly a year later, in March 1989.

An interesting fact is that the BMW Z1 project was ready in 1986, which is 3 years before the car actually went on sale.

The designer of the BMW Z1 is Harm Lagaay from the Netherlands, who previously contributed to the development of the iconic Porsche 911. The Z1 was born as large as BMW Technik GmbH a special department tasked with creating new models and improving technology in BMW cars.

Production of the BMW Z1 takes place in Munich. Apparently, the BMW company is able to produce a maximum of about 20 examples of this model per day.

Interestingly, in 1988, the BMW company claimed they had as many as 35,000 potential buyers of the Z1 model. As further events showed, this information about the Z1 had nothing to do with reality.

A total of 8,000 Z1’s were produced all with the steering wheel on the left side. Most of the BMW Z1 nearly 6,500 is sold in Germany. Italy is the second largest country in terms of the number of Z1 units sold, with less than 600 cars sold.

Interestingly, the BMW company only 5 years after the end of production of the Z1 model decided to release a replacement directly into the world. It is the BMW Z3.

The BMW Z1 is available in 6 color versions, and the most popular is the car with the red body. Interestingly, it is possible to buy a BMW Z1, whose interior is also red, but this solution is not very popular with customers.

This car body is one of the great innovations. One of the most distinctive things for the BMW Z1 is the door. Reason? The door to the Z1 does not open in the standard way, i.e. outward or upward, but is hidden in the pole below. This solution makes it possible to drive the BMW Z3 with the doors open. The detachable side panel of the BMW Z1 is also interesting.

The BMW Z1 engine is arguably the same power unit as the previous BMW 325i E30, so it has 6 cylinders, a capacity of 2.5 liters and 170 horsepower. The same goes for the BMW Z1 suspension, which was also used earlier on the 325i E30.

However the BMW Z1 was not in production for a long time, as the last copy of this car left the factory in mid-1991, which is more than 2 years after the debut of the Z1 model. The reason was the huge drop in orders for the Z1.

Even before the inaugural launch of the Z1, around 3,500 people ordered a new car for themselves, but the number of people who wanted to buy this model began to rapidly decline.