3.5L Duratec Ti-VCT V6 Engine is part of Ford Cyclone family, a naturally aspirated gasoline engine. See more review about the specs and problem in this article. First of all, Ford Cyclone family or commonly called Duratec brand is the new gasoline-engined family from Ford Motor that built-in 2006.

It replaced the previous series that was Ford V6 engine family. There are some types of the engines, one of them is 3.5L Ti-VCT V6 Engine that will review in this article. This type is on the list of ten Best Ward Machines in 2007.

The 3.5L Cyclone made from aluminum, and it has a type pf cylinder aluminum alloy open deck with liner cast-in and fully floating. It combined with bore and stroke that are same with common 3.5L EcoBoost but doesn’t more than basic structure.

The 3.5L Duratec Ti-VCT V6 Engine has been used in any Ford and Lincoln ever since 2007 when it announced on Ward’s 10 Best Engines after following its introduction. Although it is less powerful and has a smaller shape than 3.7L V-6, it has a better feature of about 5% greater fuel economy rating than 3.7L.

Ford decided to bring it to the aluminum F-150 platform, that introduced in 2015 model year. It has also EcoBoost with a twin-turbocharged, it is injected directly with gasoline (GTDI) in the version of 3.5L.

This engine can use in Ford Explorer Sport 2014-2018, Ford Flex Limited EcoBoost 2010-2016, Lincoln MKS 2010-2016, and then Ford Taurus SHO 2018. This EcoBoost is also optional for Ford Police Interceptor Utility sedan and Ford Interceptor 2014 which both of them based on Explorer and Taurus.

There are four valves per cylinder heads owned by Duratec 35. The features of this engine are chain-driven double overhead camshafts completed with variable intake timing variable intake exhaust timing (iVCT and Ti-VCT, implemented in 2011).

But then in the same year, the single roller timing chain was replaced with another string that is a silent type chain (the small chains remain the same). Previously, in Duratec V6s, a water pump as located around engine rear and driven via a rubber belt by the pulley on the intake camshaft.

The details about Ford 3.5L TI-VCT V-6 Specs are, the production plants are Lima Engine Plant, Lima, and Ohio. The applications are for 2015-2017 Ford F-150 or various Ford, Lincoln car SUV that applicated at the beginning of 2007.

This 3.5L Duratec Ti-VCT V6 Engine has natural aspiration with twin independent variable camshaft timing as for its valvetrain, and its cooling system capacity is 14.25 liters or 3.76 gallons.

This engine electronically controlled by sequential multi-port fuel injection also coil on plugs type ignition. The exhaust manifold makes from cast iron and intake manifold made from plastic. It consists of an upper and lower intake piece. 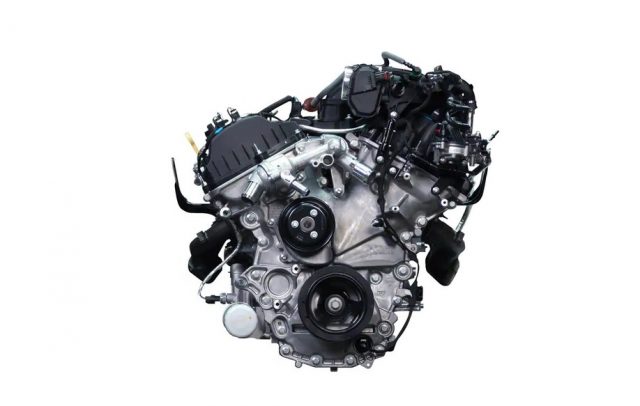 There comes the problem with the 3.5L Duratec Ti-VCT V6 Engine, and it doesn’t mean that it is terrible. There are some limitations to this engine.

The first problem is the water pump failure of Ford’s 3.5L V6 engines that commonly occurred. It is because the water pump on the 3.5L is internal or driven by a timing chain.

This caused two major issues such as, a bad water pump that can leak for some time, and it is unnoticeable until you spot the coolant level. That drops significantly. It may lead to overheating.

The second problem that caused because of the water pump is, those leaked coolants can end up in the engine oil, and it may create emulsions. It produces a lack of lubricant for all internal components, and it is really bad for any engine. This brings you a burden because you have to remove the front cover, the timing chain, and also the pulley to remove the water pump fully.

For the long run, it’s costly because very labor-intensive to replace it and causes an expensive job result. But aside from that, overall the 3.5L Duratec Ti-VCT V6 Engine gives a completely satisfactory result for light use and also right on power gas mileage. Also, the life expectancy of the engine is about 200,000 miles or approximately 300,000 km.

The 3.5L Duratec Ti-VCT V6 Engine has its functions, advantages, but also has its problems. But overall, it is pretty satisfactory engine primarily on the life expectancy that has mentioned above.

This article has said it all from the specs, functions, differences, and the last but not least one is the problem with 3.5L. We hope this article helps enough to fulfill your knowledge.