The new 2021 Mercedes S-Class is the seventh generation of the German sedan. For now it has been unveiled with a six-cylinder engine, although the arrival of a petrol V8 and a plug-in hybrid with 100 kilometers of electric autonomy is expected, the latter in 2021. It also has a wide spectrum of technology that includes the new generation of MBUX multimedia systems. 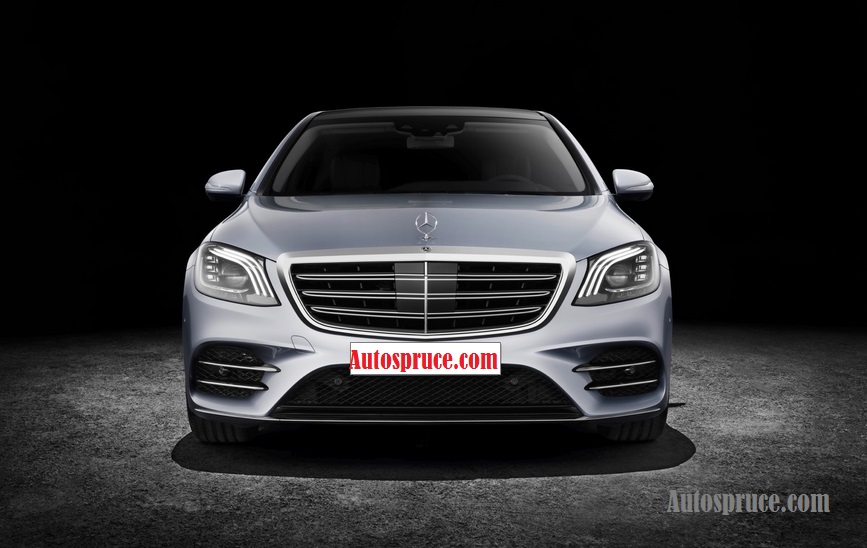 After a five-month delay, originally slated for service in April. The newly arrived 2021 Mercedes S-Class, the star flagship with which it reaches its seventh generation. The first one so named dates back to 1972, although its history really dates back to the mid-1950s.

The new 2021 Mercedes S-Class, which will again be sold in two different body lengths, finds the BMW 7 Series and Audi A8 as its main rivals. The Jaguar XJ can also be considered as such, although its conversion to an electric luxury sedan by the end of 2021 would make it an enemy for the future Mercedes-Benz EQS.

From an aesthetic point of view, the grille is updated on the 2021 S-Class, which excels in the presence and place of the Mercedes-Benz star. The optics represent the model’s three-point light trait, albeit in a sharper, more stylish design. There are also chrome detailing enhancements that seek to enhance the elegance of the set.

Digital Light Technology is an optional lighting system that allows projection of signs or warnings. It can alert drivers of pedestrians, traffic lights, signs or project guides on narrow roads. In each headlamp is a lamp module with three high power LEDs with a resolution of 1.3 million pixels.

On the side of the new 2021 Mercedes S-Class, an optional element that also stands out, some of the door handles that remain hidden until needed. They are deployed thanks to the electrical system when they detect that a driver is approaching. This is a completely new development from the manufacturer and helps offer a cleaner, quieter image in profile.

On its part, the most striking rear element is the optics, which have a detailed interior and have the ability to represent certain animations.

The new form of the 2021 Mercedes S-Class is also the result of careful aerodynamic studies. The coefficient is 0.22, which makes it one of the most efficient cars in the world in this regard and is certainly a benchmark among luxury sedans. Among its competitors, the BMW 7 Series remains at 0.24 and the Audi A8 at 0.27.

This is the available 2021 Mercedes S-Class exterior color options, check the colors list below:

The interior of the 2021 Mercedes S-Class is very oriented towards the comfort of its passengers. For example, those at the front enjoy seats with up to 19 different motors which allow from different settings to up to ten massage programs to choose from, some with a heat effect.

At the rear there are up to five different types of seats which allow this area to be oriented into a rest or work area. Two of them have the possibility of an electrical adjustment, which also allows the entry of a heated headrest.

Another advantage that the new 2021 S-Class offers over its predecessor is that it offers more space for its occupants. 38 millimeters for the driver’s elbow and 23 for the rear passenger. Headroom in the back adds 16 millimeters.

The interior lighting system of the German sedan consists of 250 LEDs which are operated by the driver’s assistant. In this way, the visual alerts they send are amplified, allowing drivers to be more easily captured.

Finally, note that the trunk of the new 2021 Mercedes S-Class has a capacity of 550 liters, an increase of 20 from the previous model. It surpasses its competitors, as the BMW 7 Series has 515 liters and the Audi A8 has 505 liters.

The new 2021 Mercedes S-Class has a technological advancement which one of the main points of claims. Among them is the debut of the second generation of multimedia systems of the German company, the famous MBUX, which for the occasion announced an increase in its processing capacity by up to 50%.

To display different information from this system, there are up to five screens in the S-Class, some optional, with OLED technology. Three of them are located on the back, while the front panel features a 12.3-inch digital dashboard and one is positioned in the center measuring up to 12.8 inches, 64% larger than before. As standard, however, the latter is 11.9 inches. The rear display measures 11.6 inches for the screen and 7 for MBUX controls. The latter are all optional.

Interior Assist is also part of the game, which is able to study passenger behavior and anticipate the maneuvers that will be carried out. It also ensures safety, for example by warning that you forget to fasten your seat belt on a previously recognized child seat.

One of the most striking novelties of the new 2021 Mercedes S-Class is its augmented reality head-up display. This system is capable of reproducing information in 3D and displaying it on a surface equivalent to a 77-inch monitor. For example, it is capable of projecting an indicative arrow at the exit we have to take on the route previously recorded in the navigator.

Hey Mercedes voice assistant is also developing. This time he was able to recognize completely natural language in 27 different languages. In addition, passengers in the rear seats can also give orders, something that has yet to happen.

Another important advancement of the new 2021 Mercedes S-Class in terms of safety is the inclusion of the first passenger airbags in the rear seats. Located behind the front seat, it prevents rear passengers from being thrown forward, avoiding the so-called ‘elephant effect’. This system works together with inflatable seat belts and is also effective for children.

Initially, the 2021 Mercedes S-Class had Level 3 autonomous driving capability. Starting in the second half of 2021, it will have the possibility to offer Level 4 thanks to the arrival of Pilot Drive, an addition which will allow the saloon to self-drive in certain heavy traffic situations or on roads without occupants. have to pay attention to what happened. However, inclusion of this system will always be subject to the laws that currently allow it.

Remote parking assistant helps the driver to park and remove the vehicle from the Smartphone. In the new version, the handling of this wizard has been greatly simplified. By including pre-installations for the Intelligent Park Pilot, the S-Class is ready to participate in Automatic Valet Parking.

In combination with the required optional equipment and suitable liaison services, available depending on the country, the sedan combines automatic and driverless parking techniques as well as unloading parking in a parking lot with the appropriate infrastructure and as long as the law regulates it.

Finally, in this part of the technology, we must emphasize solutions that will save the customer a lot of time. It’s about the Over the Air update, or what’s the same, that the car will have the ability to update more than 50 of its electronic components from its own connection without needing to visit a dealer.

The 2021 Mercedes S-Class is presented with five mechanical options initially, they are all 3.0-liter and 6-cylinder in-line. Gearbox in any case 9G-Tronic automatic with nine speed with torque converter. All engines except the lightest of Diesel, which are equipped standard with propulsion, have all wheel drive.

The petrol unit, which is supported by a ‘mild hybrid’ system and allows the S-Class to display the Eco Label, starting with the S 450 4MATIC, which develops 367 horses the electrical system adds 22 more and 500 Nm to an extra 250 of the electrical system. This engine certifies consumption according to WLTP of 7.8-9.5 liters per 100 kilometers and allows acceleration from 0 to 100 km/h in 5.1 seconds. Its top speed is 250 kph, the same as the other mechanical options disclosed so far.

The S 350D is the first of a Diesel engine. In the case of the propulsion version, it produces 286 horsepower and a maximum torque of 600 Nm. Consumption of 6.4-7.7 liters per 100 kilometers and can accelerate from 0 to 100 kilometers / hour in 6.4 seconds. For its part, the S 350d 4MATIC all-wheel drive tracks the power and torque figures, but adds some -6.6-8 liters per 100km in addition to getting two tenths of a second in terms of acceleration from 0 to 100 km/h.

The most powerful diesel is the S 400d 4MATIC, which produces 330 horses and 700 Newton meters. The approved average consumption is 6.7-8 liters per 100 kilometers and manages to reach 100 km/h from rest in 5.4 seconds.

More versions are expected to arrive later. The first will complement the V8 petrol powered by a ‘light hybrid’ system. The second, already in 2021, will be a plug-in hybrid called the S 580e that is known to be capable of electric travel of up to 100 kilometers. This figure is considerably higher than its competitors, as the Audi A8 plug-in hybrid is only available with a long body, reaching up to 46 kilometers and the BMW 7 Series between 50 and 58 depending on the version.

The electric version of the thermal engine will be the same as that of the S 500 4MATIC, and together with the electric drive will develop a power output of 517 horsepower. The battery, meanwhile, will have a capacity of 28 kilowatt hours, more than double that offered by the previous S-Class plug-in hybrid 13.5 kilowatt hours.

The AMG versions, both powered, will be the S 63e and S 73e, the first with around 700 horsepower and the second more than 800. In both cases they will use the 4.0 liter V8 engine. There will be no V12 for the seventh-generation S-Class, an honor reserved for the Maybach S-Class thanks to the 6.0 liter twin-turbo engine.

The dynamic behavior of the 2021 Mercedes S-Class once again emphasizes the comfort of its passengers. For this, Airmatic suspension is a standard which always adapts to the needs of the road.

Optionally, the E-Active Body Control active suspension can be combined, which in addition to providing added value in comfort and agility with regard to increased set safety. Thanks to a new Pre-Safe function called Impulse Side, the system is able to raise the car’s body up to 80 millimeters in tenths of a second when it detects that there is an impact to reduce the impact. This movement allows the door to absorb more energy and less severe cab damage in the event of an accident.

Directional rear axles are also optional, especially attractive on vehicles with S-Class length to improve their performance in tight spaces. With this system, the German sedan is able to reduce the turning radius by up to 1.9 meters.