The 2.5 liter Ford and Volvo engine (Duratec ST / RS) B5254T3 has 5 cylinders, the badge is Swedish, and it’s full of power! It is thanks to the 2.5 Turbo engine that the Volvo Focus RS produces 305 horsepower on asphalt. This unit also runs the top version of the Mondeo IV. 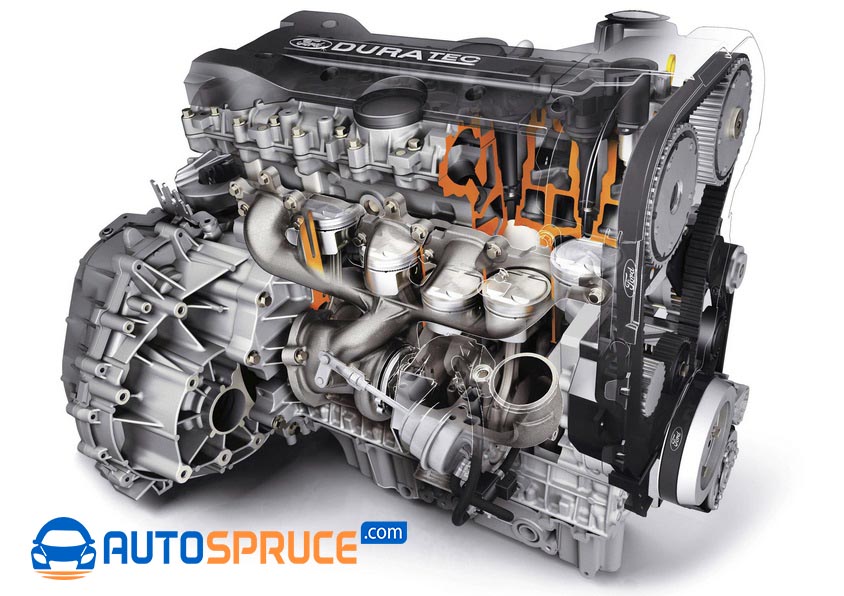 Although the 2.5 liter B5254T3 engine was installed at Ford, it was built by Volvo engineers. The engine, which was named B5254T3, was borrowed by the Americans when they had the Swedish brand name. After being moved under the hood of a Focus, Modeo or Kuga, this machine was renamed the Duratec ST or Duratec RS.

Technical details? The petrol engine has a capacity of 2,521 cm3, 5 cylinders in a row and 20 valves. The head and block are made of aluminum, the timing system includes two control shafts and variable valve timing has become standard.

The Ford and Volvo 2.5 (Duratec ST / RS) B5254T3 engines feed fuel to the cylinders using the classic MPI multi-point injection. The unit also uses an intercooled turbocharger, with the boost integrated into the exhaust manifold.

In terms of controlling the operation of the gasoline engine, a system called Bosch ME 9.0 is responsible for it. Time drive is standard for Volvos with belts. The replacement interval is set by Sweden at 150,000 kilometers. The 2.5 Turbo engine is available in at least a few power versions. Variants with 220hp to 350hp are known in the market.

One of the smallest models – the Ford Focus II – received the most powerful drive variant. I’m talking about the 350 horsepower version. Focus RS 500 has 5.6 seconds of torque and accelerates up to 264 km / hr. In total, only 500 were produced. So today is an automotive scarcity!

Typically, the 2.5 Turbo (Duratec ST / RS) B5254T3 engines installed in Volvo and Ford cars are considered by mechanics to be durable structures. If regular basic service rules were followed, it could cover even 400,000-500,000 kilometers without major repairs.

Does the 2.5 (Duratec ST / RS) B5254T3 engine have any problems? Yes, and the first is about burning! The reason is, the 2.5 liter petrol engine is definitely not economical. Even the Focus II model in the 225 HP ST variant can use up to 14 liters of fuel in urban use. This is too much!

The LPG engine will definitely cut costs! Fortunately, the Swedish 5 cylinder appetite can be a little tame. LPG installations are ideal for this purpose. The B5254T3’s 2.5 Turbo (Duratec ST / RS) engine worked well with fuel, but in three conditions.

Remembering these three rules brings so many advantages that the driver can maintain the performance of the Focus, Mondeo or S-Max, and at the same time reduce the cost of buying fuel by half.

In case of a problem with the Volvo 2.5 Turbo (Duratec ST / RS) B5254T3 engine, the turbocharger will be damaged first. However, these cases aren’t all that surprising – especially since they usually don’t appear earlier than after exceeding 200,000-250,000 kilometers.

The problems with the turbocharger is so great that the housing has been permanently connected to the exhaust manifold. This makes the price of new parts in auto stores very expensive – in excess of $ 1,100. How can I reduce repair costs? It is better to choose a regeneration done professionally.

A boost fix to the B5254T3’s 2.5 (Duratec ST / RS) engine doesn’t come cheap either – it will cost around $ 550 in the end. However, it is worth noting, for example, that the repair kit itself required to replace a damaged element costs almost $ 380 in an auto shop.

In the list of possible engine failures for the Volvo 2.5 Turbo (Duratec ST / RS) B5254T3, you should also include a dirty throttle case. The cleaning and adaptation shouldn’t be more than $ 70. A new part outside the manufacturer will cost at least $ 380.

In summary, I have limitations for drivers. The reason is, the 2.5 Turbo (Duratec ST / RS) B5254T3 engine from Volvo and Ford can be really durable. However, if ignored, they can quickly become the source of serious problems.

Example? It is very sensitive to temperature. In case of overheating, it happens that the cylinder liner is damaged – a description of such a case can be found on Ford fan forums.

Renovation? This one’s a bit ineffective. A set of elements with bushing replacements and engine closings can cost up to $ 3,300. And this number is slightly lower than the present value of some cars equipped with this engine.