The 1ZZ-FE engine is a 1.8 liter four-cylinder engine. It was developed in West Virginia and manufactured in Ontario, which is located in central Canada. Production years from 1998 to 2007. This series has become a replacement for Toyota’s A series engines. 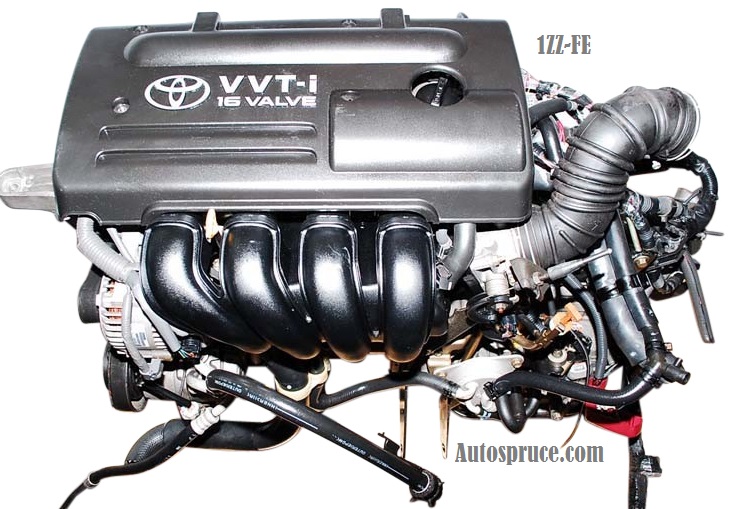 All power units of the ZZ family are united by a 4 cylinder block, 16 valve cylinder head. The engine block is made of aluminum, with a thin-walled cast iron sleeve. Another feature of the 1ZZ-FE engine block is the open casing of the cooling system, thanks to which the cylinder is better cooled, the block itself is cheaper to manufacture, but the structural rigidity is relatively low.

The Toyota 1ZZ-FE engine has the following characteristics:

The engine of this series, in contrast to the previous 7A series, is a lightweight aluminum cylinder block that uses die-casting technology. In addition, the head block is made of aluminum, and this is Toyota’s second experience in making a power unit from a lightweight alloy, which cannot withstand excess heat. That is why engineers used a laser technique to spray the valve seat.

This, as well as the cooling jacket that opens at the top, which evenly distributes heat dissipation, allows you to maintain the operating temperature at a normal level, which for this engine is 95 degrees Celsius. Even one time temperature rise over a long period of time can cause premature unit failure.

Using a time chain instead of a conventional belt requires adequate lubrication of the engine. Therefore, it is important for him not to let the oil fall below the appropriate mark on the measuring stick, which is the equivalent of 3.7 liters. By the way, the manufacturer allows the consumption of oil in the amount of 1 liter per 1000 km, which, of course, is already a sign of malfunction, but for the manufacturer “reinsurance” is not a warranty case.

The 1ZZ-FE engine manufacturer managed to achieve high power with low fuel consumption. This is made possible by the use of a multi-point injection system. Fuel consumption depends on vehicle weight, gearbox, body and drive aerodynamics. For example, to compare consumption, we used the Corolla Verso minivan on a five-stage “agitator”, the Avensis class-D representative with a four-speed automatic and the RAV4 compact crossover with mechanics and front wheel drive.

For all these cars, the average consumption is approximately the same level – about 7.5 liters in highway-city mode, which is more than a viable indicator. But even so, the highest consumption among the above cars, which are fitted with the 1ZZ-FE engine, is in the Avensis mid-range sedan. The reason lies in the box. As you know, cars with automatic transmission have a relatively higher consumption than mechanically mounted cars.

Also Avenis does not have fifth gear. The Corolla family version loses to RAV4 because the dimensions are too big and heavy. On the RAV4 side, from an economic point of view, it has low weight and high power density. Also, don’t forget that the RAV4 with its 1ZZ-FE engine is not presented in an all-wheel drive version.

During the machine design, several innovative solutions are applied. In particular, the thin-walled cast iron liner is integrated into the aluminum cylinder block, which reduces the weight of the 1ZZ-FE engine, which has a particularly uneven outer surface, which provides a strong connection and better heat transfer.

The open cooling jacket also has a number of advantages: apart from better heat dissipation, this design allows the manufacturer to fabricate the cylinder block in the mold, thereby reducing production costs. The negative aspect in this is the reduced stiffness of the blocks.

Another feature of the Toyota 1ZZ-FE is an enlarged crankcase in which the crankshaft bearings are combined. The cylinder block and crankcase are separated exactly along the center line of the crankshaft. The stiffness of the engine is increased by the fact that the steel cover of the main bearing shell is cast into a one-piece crankcase made of light alloy.

The 1ZZ engine belongs to the type with two camshaft and has sixteen valves. Toyota engineers have been able to reduce valve weight to reduce spring force, and narrow the cam width to reduce friction. The idea of ​​using valve cups (they are thrusters) to regulate valve clearance may not be considered the most plausible. Abandonment of the conventional shim has greatly complicated the adjustment procedure, which is often neglected by drivers.

Another major innovation is the use of a single row roller chain with a small note in timing drive. The tensioner is attached by a ratchet mechanism. Theoretically, this should add to reliability, but in practice it only complicates the design, reduces resources. The 1ZZ-FE long chain stretches well before the 150,000 mileage. At the same time, the engine is working harder, and the system can indicate a fault in valve timing. It is important to note that in this case all the elements of the drive must be replaced, including the sprocket and tensioner.

Not always with the Toyota 1ZZ-FE engine sold with an instruction manual in English, which describes the necessary maintenance work, the main of which are listed below.

In addition to the timing chain that needs to be replaced at a distance of 90 thousand kilometers, the Toyota 1ZZ-FE engine also needs to pay attention to the belt attachment that changes every 50,000 km. The cooler changes every 30 thousand km. Also, we shouldn’t forget the crankcase gas ventilation system – it has to be exhaled every 25,000.

The oil life in internal combustion engines is short – only 7,500 km. What oil is best to fill in Toyota with 1ZZ-FE, the driver will have to choose for himself, because the manufacturer specifies two types of viscosity 5W-30 or 10W-30, the volume of which in the engine is 3.7 liters.

The 1ZZ-FE engine is widely used by Toyota. Cars of a different class and body type came off the assembly line. For the europe market, Japanese production minivans Toyota Opa (XT10) and Toyota Wish (AE10). In addition, specifically for the Japanese market, with the 1ZZ-FE engine, an alternative sedan to the Camry Toyota Allion (T240) was produced. The five-seater Toyota Matrix (E130) hatchback, although it looks like a minivan, is not. This car was specially designed for the North American market, where it was produced.

1ZZ-FE under the hood can be found on the seventh generation Toyota Celica, where this engine was chosen for the GT series, as a budget alternative to the GT-S with 2ZZ-GE from Yamaha-Toyot.

In mass Toyota cars, the 1ZZ-FE engine is found on the RAV4 in the XA20 body, two generations of Avensis (from 1998 to 2009). But the popular Corolla changed three generations, before designers could find a viable alternative to this engine – from the 110th to the 150th generation, fans of the brand can choose this engine in the Corolla.

In addition to the Japanese car giant, the machine was used by American manufacturers – Pontiac, Chevrolet. The British lotus finished their speedster Elise with it. Even now, licensed and renamed in its own way, the ICE 1ZZ-FE is actively installed on Chinese cars, in particular, which is of concern to Geely.

The 1ZZ-FE engine is part of the small 1ZZ ICE family. Apart from him, the line includes:

There are two ways to increase the engine power of the 1ZZ-FE – by installing a supercharger or by minor modifications. In the first case, either a Toyota SC14 compressor or a Garett GT28 turbine is used. The supercharger is equipped with a 440 cc injector and a Walbro 255 fuel pump. Without the interference of the piston system, its power can be increased up to 200 hp. By replacing the connecting rod and piston with forged ones, reducing the compression ratio to 8.5, installing a 630 cc injector and installing a direct-flow exhaust, you can get over 300 hp.

The second case will give you a maximum increase of only 30 horses, but it doesn’t require a big investment either. Monkey Wrench Racing cool air intake, direct-flow exhaust and second-level camshaft. There are no other settings for the 1ZZ-FE.

Like any other engine, the 1ZZ-FE from Toyota has pros and cons. Despite being large, the power unit does not please the rider. The reason is the relatively small machine resources. But its innovation and successful design led to the fact that in the future, this engine would serve as a prototype for another Toyota engine – 2ZZ-GE or 4ZZ-FE.