The Volkswagen 1.9 TDI engine itself has become an icon not only in the United States, but also in Germany. However, the ARL variant is very popular and you will recognize it by the red letters TDI. Today a few words about him and his weaker brother ASZ. 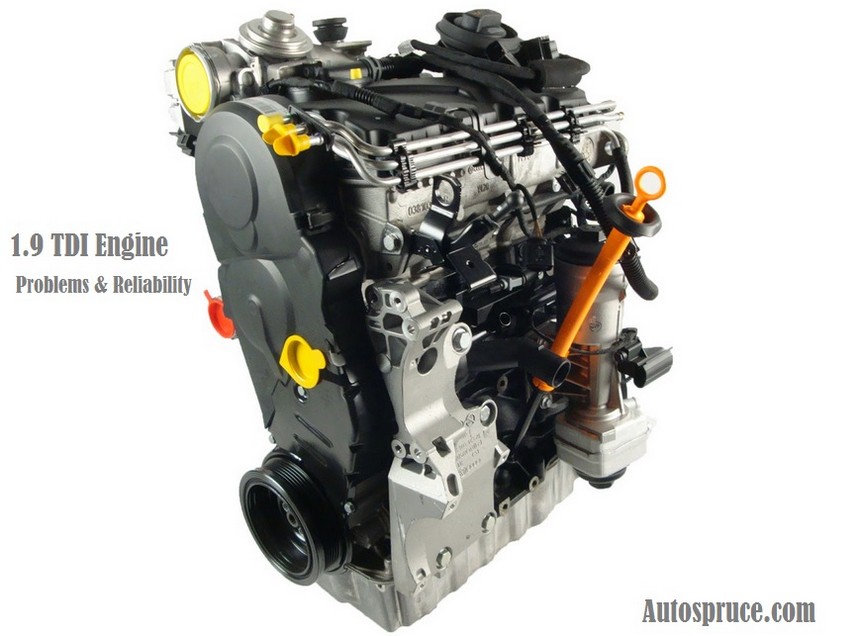 1.9 TDI engines can be divided into two types in terms of power supply – injection pump and unit injectors. The first ones were weaker, but after the introduction of unit injectors (PD), the power increased until 150 HP was obtained.

You will recognize a car with an ARL engine by the fact that the 1.9 TDI marking is red. Of course, many users have bought such a designation for their 90 HP machine, just like BMW drivers bought more M badges than BMW M released cars from the factory.

On the other hand, the 130hp versions differed visually in that only the DI was red and the T remained silver. These are engines that in some models represent top versions, an example of which is the Škoda Fabia RS equipped with this unit (ASZ).

However, the color scheme is not a rule and the same Fabia with a 100 HP engine may also have a red DI. Besides, Volkswagen had different approaches to the color scheme since 2003, and eventually ended up with a silver TDI for each version.

Let’s focus on the 1.9 TDI ARL engine, which is the favorite of tuners dealing with tuning and diesel modifications. It made its debut with the ASZ in 2000, therefore it complies with the Euro 3 standard and does not have a DPF filter. It does have a catalytic converter and an EGR valve, as well as a turbocharger with variable geometry. Contrary to appearances, also a simple design compared to more modern units – e.g. an 8-valve head.

ARL factory develops a power of 150 hp and torque of 320 Nm. The 1.9 TDI ASZ engine is structurally similar, but with a factory power of 130 HP and a torque of 310 Nm. However, it has many common parts and solutions. It has outlived several years longer than the ARL, which ended in 2005. It was also used in more models.

Maximum power and torque are parameters given by the manufacturer, but in fact, a fully functional unit generates better.

Is the 1.9 TDI engine that expensive to repair? No. The comparison of the mechanics is good, because this car with 1.9 TDI can be bought for $520-$1290. As for an engine designed for high power and great performance – cars with a factory engine accelerate to 100 km / h in about 9 seconds – it is quite cheap to maintain and repair. However, the age of this construction and huge mileage do their job. Worse if we buy a neglected car.

That’s why it’s worth looking for art from a person who had a heart for a car. It is good to “overpay” the $520-$780. If the previous owner took care of regular service and fixed faults in the accessories, the unit will last 250,000-300,000 km. with factory parameters and on many factory parts. You should absolutely not be afraid of such mileage, but you can expect some expenses related to the wear of some components and elements.

The old generation injection system can be regenerated. Replacing the injectors costs about $520-$650 plus labor. Sometimes this is accompanied by a tandem pump, which is responsible for creating a vacuum and feeding fuel at the same time. The cost of a new one is $170, but we will pay a quarter of this amount for regeneration.

After purchase, it is necessary to replace the timing drive, complete. The belt with rollers, water pump and other elements to be replaced cost about $130 and you need to add the cost of replacement, which in 1.9 TDI engine is not a big challenge for a mechanic.

Unfortunately, during the revision of the top of the 1.9 TDI engine, it may turn out that you also need to replace the camshaft with shells and hydro tappets – $260 plus labor. If you do it comprehensively with timing gear replacement, you will pay less.

I am pleased with the low prices of parts, which are much more expensive in more modern engines. The AutoSpruce expert lists some examples in one breath:

These are not large individual expenses, but if someone finds an engine in which these elements are still original, when they start to fail, the number of defects can irritate. Even the serious ones are not particularly expensive.

The turbocharger itself costs about $260 and here, of course, you should add at least twice as much for a comprehensive replacement. If you have any modifications planned, it is better to have a trusted person repaired. Usually, if there is an engine tuning planned, the turbo is replaced with a bigger one. It is similar with the intake system and intercooler.

Sometimes the gearbox also requires regeneration, which costs about $155. The clutch works with a dual-mass flywheel, but as befits a Volkswagen, replacements are available at a reasonable price – about $364 for a complete set with a clutch and clutch actuator.

Of course, if the budget has no limits, the engine does not. Reasonable tuning closes with a power of approx 200 HP and a torque approaching 400 Nm. There is no need to interfere with any mechanical components. After modifying the boost, intake and exhaust, you can target over 200hp and over 400Nm.

What car models with ARL can you buy?

The 1.9 TDI engine with this specific marking was installed in three models and it was quite short, but so many cars were sold that there is no problem with buying it after 15–20 years. It is worth noting that there is a choice not only between bodies. The Seat Leon and VW Golf combined ARL with four-wheel drive (optional). The Toledo is front wheel drive only.

An ASZ or other 150hp varieties are also a good solution. Basically, the ARL was only found in compact cars: VW Golf IV, Seat Leon I and Seat Toledo II. However, a version with the same power, but with the designation BTB, went to VW Sharan and Ford Galaxy.

The ASZ version appeared with 12 models from the Škoda Fabia RS to the Sharan. When buying, I would advise you to suggest the condition and actual, although difficult to determine, mileage rather than the marking. If the 1.9 TDI engine is 130 HP, it gives good performance and there is a potential to increase it.

I know from experience that the most noteworthy are cars that the previous owner has already owned for several years and has receipts or invoices for repairs and service.

Then the 1.9 TDI engine mileage of the order of 250,000-300,000 km should not discourage you. You can buy a beautifully looking copy from beyond our western border, without repair history, but it is possible that it will require a lot of investment in a moment. Better to buy a car from an enthusiast.