VW Group cars with 1.8 TSI / TFSI EA888 engines Gen 1,2 & 3 continue to arrive in the aftermarket, but this unit has been made infamous for its oil-burning problems. Many ask themselves a simple question: should I take a risk and buy such a car? We advise on how to solve this dilemma. 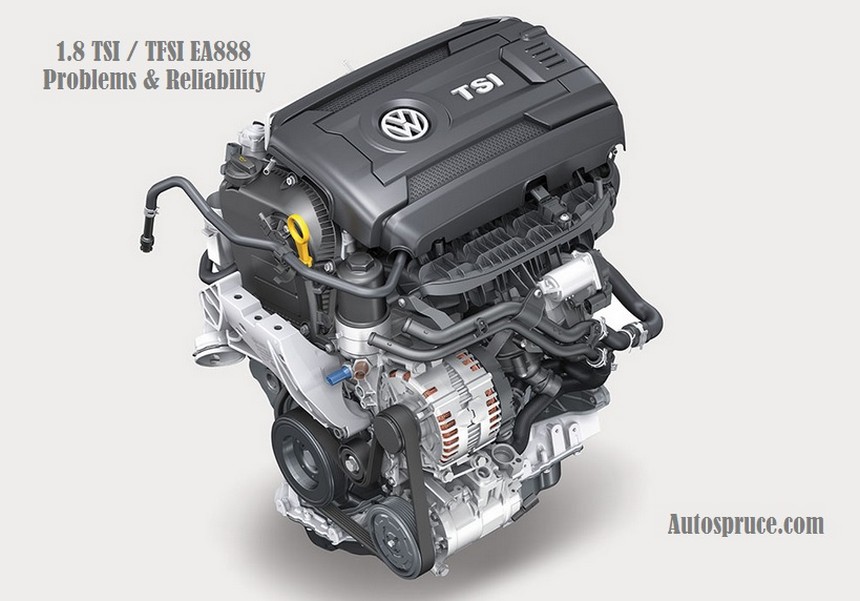 Cars from the VW Group with a 1.8 TSI / TFSI EA888 engine are generally good cars, but the engine marking is a nightmare for both owners and buyers. The engine is characterized by great dynamics with relatively low fuel consumption.

For example, the Škoda Octavia II with the weakest 1.8 TSI variant accelerates to hundreds in 8.1 seconds. This is the level of early GTI hatchbacks, so it is hardly surprising that the car is interesting. The more so that approx 20%-25% cars with gasoline engines after 2008, it is 1.8 TSI. Prices from $4415 to $7790 look equally inviting.

Often in interviews or publications, some inconsistencies can be found about the generation of TSI / TFSI engines. Which one has a problem with burning oil – the first or the second? Both, in fact. It all depends on whether it is the 1.8 TSI or the twin 2.0 TSI, which has an almost identical design.

The point is that the first generation of the 2.0 TSI engine is the EA113 family – the 1.8 version was not offered here. This is a completely different engine than the one described here. The second is the unit from the EA888 family, presented in 2007, which was already offered in two capacities – 1.8 l and 2.0 l – and this is the problem of oil combustion.

The third generation of the 2.0 TSI engine, and at the same time the second 1.8 TSI, is still the EA888 family, in which in 2011, among others, revised pistons and dual fuel injection system (direct and indirect).

Theoretically, this generation is not affected by the problem with oil combustion, but until 2014 this phenomenon still occurred, only on a much smaller scale. In 2015, the previous versions were replaced with the so-called generation 3B, in which the problem was completely and practically eliminated.

While the 1.8 TSI / TFSI engine generation does not always match the car’s production year, defective engines were completely removed from the offer by 2015. This means that cars produced since 2015 are completely free from the drawback of excessive oil consumption.

It is worth noting, however, that a large group of cars from 2012–2015 already have improved engines. First of all, corrections were made to Audi models and new models, and when, if not in 2012, the Volkswagen Group’s range underwent the biggest change?

The safest option is to buy a 2015-2018 car, although there are opinions that sometimes too much oil is consumed in these cars. This is most likely due to the rather intensive use, lack of care for getting in, and we are talking about a much smaller scale of the problem. Cars from the year 2012 upwards can be considered relatively safe, while those from 2015 as the most recommendable. Below is a list of cars that you should consider when buying.

It would seem that the prices of cars with a risky, non-recommended engine should be significantly lower than others. Unfortunately this is not the case. For example, gasoline versions of the Škoda Octavia II cost from $3115 to approx.

Due to the large number of cars used by Polish drivers, independent garages quickly responded to their needs. Various repair technologies have developed.

Which method is effective?

However, I do not think that buying a used engine is a game worth the risk, unless the car has a damaged engine and its owner wants to get rid of it.

I am not able to say clearly what you should choose, because it depends both on your budget and the purpose of the car. Certainly, with these cheaper repairs, you should verify, among others cylinder liners and camshafts.

However, I am happy to read the comments of people who have already repaired such an engine and what experience they have in this connection. I also refer to the opinions of AutoSpruce users.

Got 1.8 TSI / TFSI? Don’t wait for the problem to get too big. If you already have a car with such an engine, it is not worth selling it right away for fear of a problem. If your car does not use more than 0.2 liters of oil per 1000 km, it is only worth checking the timing chain and cleaning the unit from carbon deposits every 100,000 km. If you like your car, you can try to verify the cylinder and rings and possibly modify or replace the pistons with rings for new ones.

When can you be concerned? First of all, when you observe more than 0.2 l / 100 km of oil consumption, and in particular 0.5 l, it is not just about the oil itself. Burning it and creating more carbon deposits can block the flow of oil to the tensioner and stretch the timing chain, cause it to jump and damage the engine.

In addition, if you consume the oil excessively, you must check its level frequently. If it is not enough, the unit will be seized up. The problem simply cannot be underestimated, although you can ride with it.