The VW 1.6 BFQ EA827 engine is part of the range of powertrains using a piston group designed for a compression ratio of 10.3: 1. In addition to it, it includes motors with the designations ALZ, AVU, AYD, BFS, BGU, BSE, BSF, CCSA. These motors were produced by the Volkswagen AG concern for 7 years (2000-2006). 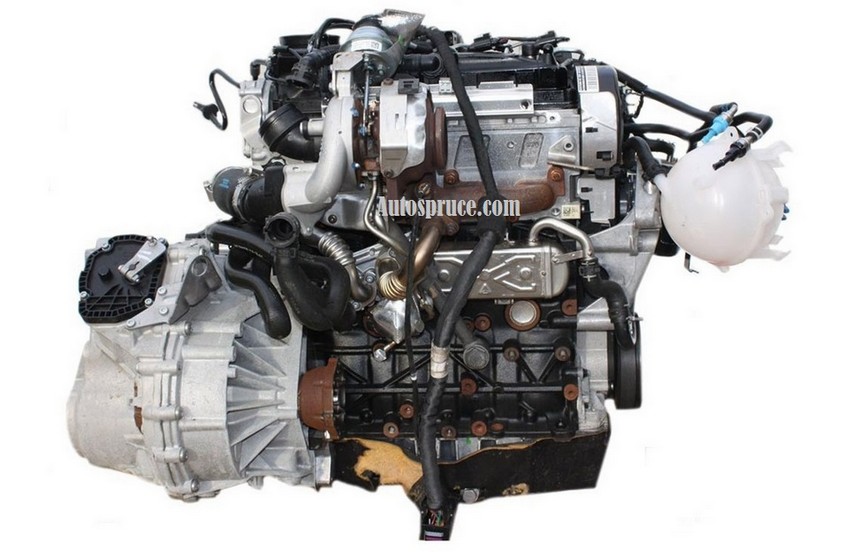 A large number of factory designations are mainly associated with the use of various attachments, new firmwares for the electronic engine control unit, as well as technological and / or design improvements that are constantly being introduced during the production process.

Structurally, the VW 1.6 bfq engine is a reduced version of the EA827 1.8 (1983) engine, in the cast-iron cylinder block of which a short-stroke crankshaft was installed, providing a piston stroke to cylinder diameter ratio of about 0.956. This made it possible to increase the engine power at high crankshaft speeds while maintaining a small volume of cylinders. At the same time, the throttle response of the power unit at low speeds has deteriorated somewhat.

The aluminum overhead camshaft cylinder head is equipped with a SONC 8V timing mechanism. The variable valve timing system is located on the intake shaft. The gas distribution mechanism is driven by a toothed belt, when it breaks, the valves bend. In this regard, the drive belt must be changed at least every 50,000-60,00 kilometers.

Adjustment of the thermal clearances of the valves during operation is not required, since there are special hydraulic compensators.

Regular maintenance of VW 1.6 bfq EA827 power units is an unconditional condition for trouble-free operation for a long time. The list of operations and the frequency of their carrying out are stipulated, for example, in the operating manual of such a car as the Skoda Octavia. In particular, it is recommended to replace:

In addition, the use of diluted G11 or G12 concentrates as a coolant requires compliance with certain rules:

Concentrate G11 is a blue-green liquid, which is diluted with distilled water in the ratio:

Coolant based on G11 concentrate requires replacement at least once every 2 years.

Concentrate G12 (G12 +, G12 ++) is a red liquid, which is also diluted with distilled water in the following proportions:

The VW 1.6 bfq EA827 engine is considered reliable enough to drive more than 300 thousand km without major repairs, however, it also has a number of typical malfunctions, some of which are shown in the table.

An unpleasant feature, which owners of cars aggregated with a bfq engine often encounter, is the strong vibration of the engine during operation. You can eliminate this defect:

The VW 1.6 bfq EA827 powertrain is an engine designed for use in conventional city cars. It is practically unsuitable for off-road or sport mode operation. Therefore, when trying to significantly increase the power of the bfq engine, the owner will have to replace almost all the “insides” and the 8-valve cylinder head. In this regard, when carrying out its tuning, as a rule, they are limited to changes that make it possible to increase the engine power from 5 to 30 hp. from.

Engine made in Germany enjoy a well-deserved reputation for reliable and durable powertrains. This fully applies to the products of the well-known automotive concern Volkswagen AG, whose engines are developed and manufactured on the basis of the most modern technical solutions.

These include various modifications of the EA827 power unit (cylinder volume 1.8 liters), among which the line of reduced EA827 1.6 engines (pn, aek, ana, aeh, alz, etc.) is especially interesting. Its worthy representative is the bfq engine, which is installed, for example, on Skoda Octavia cars.