The extremely popular 1.5 dCi diesel engine has been installed in a wide variety of cars for almost 20 years. Praised for its very low fuel consumption, it is also known for a disadvantage – accelerated wear of the bushings. In practice, it may seize up, but contrary to appearances, it is not a big problem. It helps to replace the sockets once in a while. 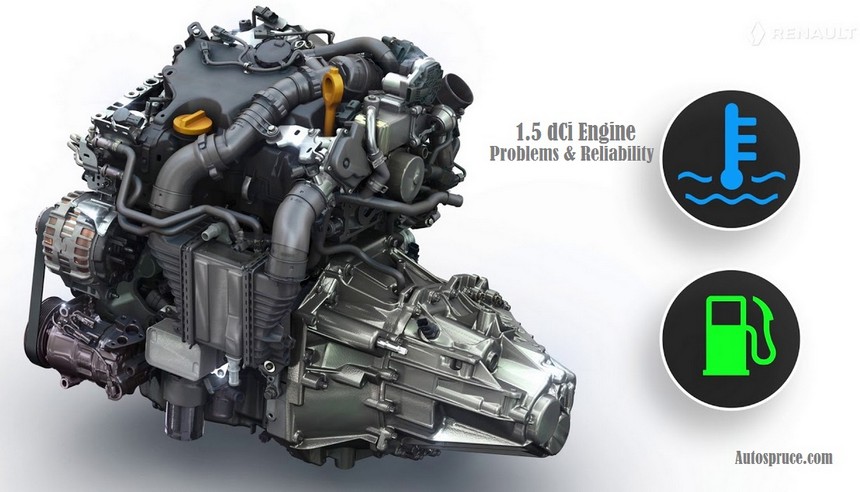 The 1.5 dCi engine (internal designation K9K) debuted in 2001 in the Renault Clio II. The small diesel engine quickly became a hit. It was placed under the hood of compact cars, and with time also in the Kangoo kombivan, Lodgy minivan or the large Laguna III and then Talisman.

It drives not only French cars, but also date, Nissan, Suzuki for some time, and with time it has caught on in Mercedes or Japanese Infiniti. Although a more powerful successor appeared – 1.6 dCi (R9M) – and then another – 1.7 dCi (R9N) – it was not withdrawn from the offer in many models.

Which ones are worth for buying 1.5 dCi engine?

Several dozen variants of the 1.5 dCi engine and car models that were equipped with it give a huge selection and sometimes a dilemma. Although I believe that the 1.5 dCi is a good choice overall, in my opinion not every car model. Here is a list of the most popular with a rough application assessment.

When to change oil and timing gear?

The manufacturer recommends replacing the timing belt every 120,000 km in units produced by 2010 and every 160,000 km in newer constructions. Mechanics familiar with this engine recommend replacing the valve timing every 80,000-100,000 km. There are situations when the belt is broken and the 1.5 dCi engine is damaged.

A good practice is prophylactic replacement of the bushings during the second timing gear replacement, that is every 160,000–200,000 km. Despite the use of shorter oil intervals, e.g. every 15,000-20,000 km, they may already be worn enough to be replaced. And here someone can ask the right question: is it not an exaggeration?

It turns out not. Just as it is not an exaggeration to replace the bushings at the first service after purchasing a car with a mileage greater than 100,000 km , because it is not known how the engine was operated.

How much does it cost to replace bushings in a 1.5 dCi engine?

As the 1.5 dCi engine appeared in several dozen versions, and we write here generally, I will not give you a single price. The bushings, on the other hand, cost from $16 (!) To about $78 for parts purchased at an authorized service station. In a specialized workshop, the cost of replacing the bushings with parts is about $130-$155. To this, add engine oil and possibly seals where leaks appear.

A mechanic who does not deal with this on a daily basis, and you entrust him with such an activity, may demand a slightly higher amount out of caution. Generally, in the case of even the most expensive variant, the cost of replacing the bushings should not exceed $260.

I have even better news when it comes to costs. There are ready-made kits for the overhaul of the lower part of the engine on the market for up to $390 – depending on its variant. It is not only a set of bushings, but also connecting rods and crankshaft, as well as seals and often an oil pump.

You need to know that if the worn bushings have damaged the working surface of the shaft, it should be regenerated or replaced. We are talking about parts or activities that in the case of many other diesels will cost $780-$1040!

When replacing the bushings, it is worth adding about $52-$65 to replace the oil pump, also completely prophylactically. It can cause low oil pressure, but high enough not to be detected by sensors. If we add the replacement of the timing drive, the maximum bill from the workshop should be $520.

And we are talking not only about the old Clio II or the simple Dacia Logan, but for example the several-year-old Nissan Qashqai, Renault Talisman or the Mercedes A160d or A180d. Are you still saying that the 1.5 dCi diesel carries a lot of risk?

Is it worth replacing the bushings prophylactically?

Yes. With such low prices for both parts and services – it is quite easy for a skilled mechanic – it is really worth it. The cost of the order of $260-$520, depending on the scope of work and the year of the car, is not much. In many cars, the same timing gear replacement costs little less, and sometimes much more. And we are talking about full service and partial engine overhaul.

Basically, it is worth thinking about replacing the bushings when the car has never had them replaced or when more than 100,000 km has passed. Even in newer engines, the first signs of wear are observed with mileage of 100,000–120,000 km, that is when it comes to replacing the timing drive.

At a low cost, you can give the 1.5 dCi engine a new life and give yourself peace of mind for years, and all comments and malice regarding the failure rate of this unit can be acknowledged with a smile.

The key advantage of this 1.5 dCi engine is its low fuel consumption. In a compact car, results of the order of 4 l / 100 km on the road can be easily achieved. What’s more, the continuous development of this 1.5 dCi engine allowed to keep its exhaust gases in check, which meant that not only was it not withdrawn in favor of newer and larger structures, but even in some models it was kept as the only one. For example, a Mercedes C-Class is equipped with a 1.6 liter engine, but the A-Class is powered by a 1.5 engine.

Jasmine Lee
0
The Pontiac Fiero is a small sports car manufactured by General Motors under the Pontiac brand. Production lasted from 1984 to 1988. For Pontiac,...